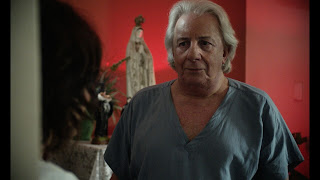 From Carnaval Filmes comes Greta, a Brazilian LGBTQ drama from director Armando Praça in his directorial debut. Staring Marco Nanini as Pedro, Greta tells the story of a 70-year-old gay nurse who is troubled with the task of saving his best friend, Daniela, played by Denise Weinberg, by finding her an empty bed in the hospital in which he works. Pedro sees an opportunity when a criminal in police custody who is charged with involuntary manslaughter named Jean, played by Démick Lopez, is admitted into the hospital that same evening. By helping Jean escape from the premises and police custody, Pedro can free up a bed for the reluctant Daniela, who needs to stay in the hospital and receive her test results.

Upon escaping, the lonely Pedro offers to allow Jean to stay with him at his home, as he is worried about the status of Jean’s wounds. By allowing Jean to stay in his home, Pedro knows he would be able to treat his open sores. The two men enter into a highly sexualized affair as Jean’s external wounds begin to heal, and Pedro’s internal wounds slowly begin to deepen as he is forced to come to terms with his best friend’s inevitable and untimely death.

The title of the film, Greta, comes from the lead character’s deep admiration for the actress, Greta Garbo, which he frequently requests to be called during his sexual encounters. This daring drama does not shy away at all from these sexual encounters, which makes for a very explicit film. It was very refreshing to see gay love scenes not being censored in a time of mainly only heterosexual scenes being shown in film.

A seasoned stage, film, and tv actor with a very full career spanning the past five decades, Nanini gives a strong performance in the lead role, allowing the audience to fully immerse in the solitude and sorrow that Pedro is experiencing. The director did a remarkable job adapting this film from the 1973 stage comedy, Greta Garbo, quem diria acabou no irajá, into the strong drama that this film is. Praça’s goal of developing the character’s in the source material from stereotypical caricatures to real people was achieved with flying colors, making for a heartfelt drama that keeps you fully immersed in its 97-minute-long running time. Greta comes to video on demand services Tuesday, November 26.
(Review by Alyssa Lurvey)