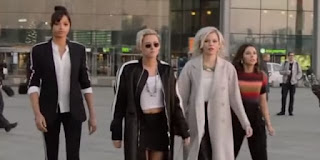 When it was announced, a new film adaptation of “Charlie’s Angels” wasn’t a particularly welcome addition to the year’s cinematic releases. The original movie adaptation, directed by McG, was a lot of fun but any attempts at establishing a franchise died after the sequel. The franchise was left alone until a new TV show was attempted in 2011 which didn’t do so well and promptly disappeared into obscurity. To be perfectly honest, as much as I thought this new version was a bad idea, a viewing of the trailer for writer/director Elizabeth Bank’s take on the material changed my mind. This one looked like it too would be fun, a piece of escapist cinema in line with McG’s early 2000 movies. Unfortunately, that’s not quite the case. Banks has a lot to work with here including a fine cast and a good budget but the movie never completely comes together.

In this version, the Townsend Agency has been expanded into a global operation by a forward thinking Bosley (Patrick Stewart), enlisting multiple Angels and Bosleys in operations scattered throughout the world to keep up with their workload. Banks, who also stars as one of the many Bosleys, uses a series of badly photoshopped images to insert Stewart amongst the cast of the original TV show and the 2000s movies, showing how the agency has evolved over the years.

Angels Sabina (Kristen Stewart) and Jane (Ella Balinska) are tasked with accompanying a Bosley (Djimon Hounsou) to meet with a whistleblower, Elena (Naomi Scott). Elena has created a handheld gadget for her boss, Brok (Sam Claflin), that can power an entire office building and much more, but the kinks haven’t been worked out yet. One of Elena’s co-workers ended up in the hospital following a power surge from the gadget. But, despite her warnings, the company still wants to launch the product. As Elena begins to give her insider information to Bosley, they are attacked by an assassin (Jonathan Tucker). Banks’ Bosley comes to their aid, acting as the Angels handler following the attack. Now, Sabina and Jane have to keep Elena safe while trying to recover her creation and figure out how someone knew about their meeting.

This is not the fun, over-the-top action movie implied by the trailers. By this point in her career, Banks may have a handle on directing comedic and dramatic sequences, but she doesn’t yet have a handle on action sequences. Those presented here are dull, lifeless, and by-the-numbers. They get the job done, but they aren’t all that interesting to watch. Not exactly a positive note for an action movie. At least Banks has the good sense to make her action sequences visually stable. These scenes might lack the expected punchiness, but they are handled in a coherent manner, avoiding the choppy, chaotic mess a lot of modern action movies fall victim to.

The cast works well in their roles. There’s a nice rapport created between the three leads. Kristen Stewart especially shines here as the film’s slickly cool comic relief, though her characters’ spunk doesn’t help to liven up the picture. The jokes, more often than not, fall as flat as the action set pieces. Balinska’s Jane is ice to Sabina’s fire. There’s something of a friendly, non-competitive rivalry going on between the two throughout the movie. Like in the other iterations, these Angels are smart and smooth - fast and ingenious, fully capable of handling themselves in any situation.

Banks’ script tries too hard to confuse the viewer on the true identity of her film’s villain. If things seem too obviously laid out, it’s because they are. By the time all is revealed, you probably won’t care anymore if you ever did at all. Elaborate sequences are used to advance the story in small or non-existent increments. I often found myself wondering what the point of some scenes were after they were over. If this sparks a sequel or two, I suspect neither, hopefully the follow-ups will be better. “Charlie’s Angels” isn’t an outright terrible movie - it’s just bland.
(Review by Bret Oswald)

Posted by Dallas Movie Screenings at 9:29 AM