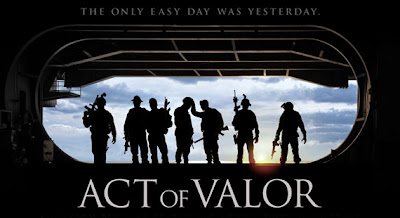 Co-directors Mike McCoy and Scott Waugh also known as the Bandito Brothers decided to take up film-making after a career of getting injured as stunt-men. Taking two years to develop from a script by Kurt Johnstad some time along the way it was decided the best way to portray the highly trained SEAL team was to use real SEALS. A dicey prospect considering the teams would often have to leave on real life missions and one never new if they would come back. Un-named real deal SEALS were used with professional actors mixed in for a story of covert operation involving a kidnapped CIA agent and terrorists that take them all over the world.

Five years ago the small independent film company was allowed access to the elite ranks to film the training exercises in what everyone hoped would be a recruitment video that would have limited runs in military towns. The film would feature the SEALS unique technical abilities that represent the acronym as in SEa, Air and Land. In light of recent Obama missions which involved SEAL Team 6 that took down Bin Laden and most recently saved a couple of reporters from terrorists the story was expanded to show how a real operation like this would be accomplished. The movie also emphasizes the highly trained skills and mindsets that are necessary to get the job done. It also shines a light on the sacrifices the families of these men have to endure when they may not see their husbands, fathers, or sons for months at a time.

It's hard to tell the real actors (Alex Veadov, Roselyn Sanchez, Nestor Serrano and Emilio Rivera) from the real team members here. The acting is merely serviceable if not uncomfortably awkward to advance the story. What you have to keep in mind is the operations you see on screen are what these guys do in real life. Some of the high caliber gun fire you see is with LIVE ammo as we are told in the clip by the directors before the movie starts. There are plenty of explosions, tight action sequences, fast boats with U.S. Navy Special Warfare Combatant Crewman exchanging machine gun fire that look like small lighted missiles flying through the sky. We are however are assured that no tactical secrets are revealed in the movie. The filmmakers were allowed some liberties in some scenes for for the story. The Navy did negotiate deleting scenes for security reasons.

Despite the often time stilted dialogue which is often awkward, it's over the top heartfelt sentimentalities are evident especially when saying goodbyes to their families or when losing a comrade on the field. The brotherhood instilled in these men by their intense training is well known. The SEALS would have been better served by this film being a documentary instead of a pseudo adventure that hits the audience over the head with it's patriotism. The propaganda is loud and clear. If you just want to be entertained go see Michael Biehn and Charlie Sheen's Navy SEALS who pretty much do the same missions only with actual character development.
(Review by reesa)

Email ThisBlogThis!Share to TwitterShare to FacebookShare to Pinterest
Labels: Act of Valor review