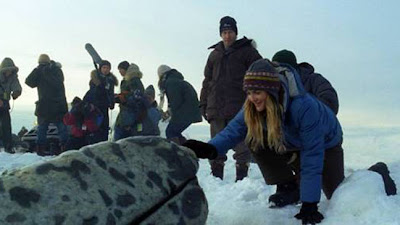 In 1988 three gray whales were found trapped in pack ice near Barrow, Alaska. The attempts to save the whales generated media attention and a global effort to free them. Director Ken Kwapis (The Sisterhood of the Traveling Pants and He's Just Not That Into You) with screen writers Jack Amiel and Michael Begler (both of The Prince & Me) were inspired by Thomas Rose's book “Freeing the Whales”. The result is a hodgepodge of a large diverse cast of familiar actors who face disaster, romance, media ambition, small town quirkiness, and aboriginal sensitivity into eco-friendly film good for the whole family.

Adam Carlson (John Krasinski) is a reporter from Anchorage who is doing a story about a Mexican restaurant finds the story of the trapped whales as his ticket to the “outside”. That's Alaskan speak for the lower 48. Ted Danson plays oilman J.W. McGraw who gets permission to drill in the wild life protected Bristol Bay. Green Peace activist Rachel Kramer (Drew Barrymore) interrupts the lease rights meeting protesting before getting kicked out. She's also the ex-girlfriend of Adam and gets on his case for not telling her first about the whales. The California Gray parents and their 9 month old baby whale who were on their way to migrate in Mexico got trapped five miles out and behind a ice wall to the open ocean. Wildlife expert (Tim Blake Nelson) agrees that once the hole in the ice freezes over the whales will drown. Before that happens the local Inupiaq Inuit tribe will harvest the animals for food as per their native rights. John's report goes national with the assistance of Rachel's heart felt plea to help them. Soon everyone jumps on the band wagon to use this blight for their own benefit. Junior TV reporter Jill Jerard (Kristen Bell) from LA thinks this is a make or break chance when the main newsman thinks it's just a cat in the tree story. Alaskan Governor Haskell (Stephen Root) doesn't want to send the Coast Guard in to help because of the expense just for whales until the political machine behind Reagan thinks it's a good move for the President. Even McGraw (under the influence of his sneaky wife manipulation) decides to clean up his image by putting in his money to help the whales by having helicopters tow an ice barge to break through. Even the town benefits from the influx of outsiders by jacking up the price of services.

The story is obviously Hollywoodized to the nth degree with it's two dimensional characters and even the title of the film informs the result of the plot. Rachel is shrill and obsessed with her eco-rants that you can understand why Adam broke up with her. Jill is so single minded about getting her story out that even when the baby whale dies she's trying to get in front of the camera. By the book helicopter pilot Colonel Tom Carroll (Dermont Mulroney) questions the worthiness of the mission (“Are they at least killer whales?”). Despite the predictable plot it's presented in the way that palatable and non offensive. There's a nice respect to the Inupiat community showing the grandfather Malik (John Pingayak) trying to teach honor of their way of life to his tech savvy grandson Nathan (Ahmoagak Sweeney). The Soviet Union eventually lent an ice breaker to come help after the natives broke 405 holes into the ice on the way to open sea.

Watch the credits for the actual people portrayed in the film. In real life it cost 1 million dollars for the rescue. Whale experts say that this event was the catalyst to changing peoples attitudes towards whales. If movies like this and their Burger King toy tie in helps bring today's children to become more aware of our responsibility to our world and it's inhabitants then bring it on.
(Review by reesa)

Email ThisBlogThis!Share to TwitterShare to FacebookShare to Pinterest
Labels: The Big Miracle review