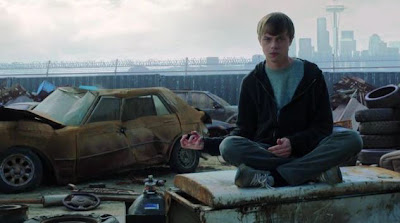 There's some YouTube videos of these kids doing pranks that look real like blowing someone up or turning them into a chicken. They are fun filled with “how did they that?” scenes. Watching the trailer for the new film Chronicle seems like a bigger budget YouTube event. There's the “found footage” element that's getting over killed with the Paranormal movies but in this case it works better with greater effect and raises the bar for future films using this contrivance.

Andrew (Dane Dehaan) lives with his drunk abusive father and his dying mother. His only friend is is cousin Matt (Alex Russell) who likes him out of sympathy and kinship. Andrew decides to record everything with an large old video camera. He even takes it to school where because he's withdrawn and introverted is often bullied. Matt encourages him to attend a party because they are senior and asks him not to bring the camera. Andrew of course does and gets beat up. Licking his wounds out side he meets Steve Montgomery (Michael B. Jordan) who is running for class president. He tells Andrew to hurry and bring his camera. He and Matt had found something amazing. There's a hole in the ground which they go to investigate with reluctant Andrew in tow. What they find in that hole is unclear but changes them forever.

The use of the video camera keeps the focus of story from Andrew's perspective although it's interspersed with traditional film making so the viewer is not limited to being trapped with shaky camera syndrome. The boys discover after the night in the cave that they have telekinetic abilities which are increasing each day. They even discover how to fly. The flying sequences are funny, awkward and thrilling. Especially the landings. The kids don't quickly don stretch body suits in primary colors and masks. Being teenagers they don't think about using these powers for good. They want to just want to mess around and pull pranks like moving a woman's car from one parking space to another. Their impulsive teenage minds raises the issue of control and as expected it get them into their first spot of danger. Matt the more grounded of the three suggests that they have some rules like not using it when they are angry. Despite the early warning signal what happened to them they believe that it's best time they have ever had in their lives. Steve helps Andrew out of shell by using his powers in a magic act at the high school talent show. The sudden acceptance by his fellow students is heady. Unfortunately Andrew is so bent and twisted by his horrific home life that it sends him over to the dark side.

First feature director Josh Trank and writer Max Landis (son of John Landis) have meshed sci-fi comic book superhero genre with real life conventional teenage life. The YouTube generation will easily relate to the portrayal of their peers. Trank manages to give the leads a sense of friendship, remorse and humanity. There's no quirky, snarky, and precocious attitudes. No one is shot with good lighting and expense clothes. The audience feels invested in what will happen to these young men and whether Andrew will overcome what eventually will become inevitable.

The viral marketing campaign has been aimed at the technically savvy with social media and QR bar codes for smart phones. The current YouTube with these remote controlled cutouts that look like people flying around NYC is blowing up. It's the first movie of the year that makes one glad January is over.
(Review by reesa)