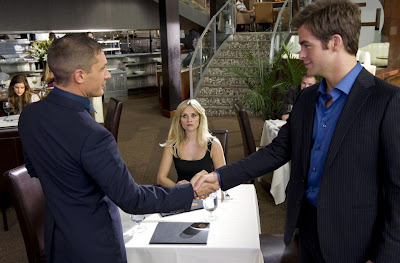 To make a successful rom-com especially during Valentine's day you need competent attractive actors reciting quick and clever dialogue. Reese Witherspoon, Chris Pine and Tom Hardy fill these shoes competently. Director McG (Terminator Salvation) and the writers Timothy Dowling and Simon Kinberg (Mr. and Mrs. Smith) handle the Spy vs Spy over the same woman without the typical misunderstandings and cattiness. It's more fun than one expects partly in thanks to Chelsea Handler who steals the movie because it's that thin in content.

FDR (Chris Pine) and Tuck (Tom Hardy) are CIA agents, partners and best friends. They trust each other in the field completely. FDR is a womanizer and Tuck who already has 7 year old son with his ex is the more romantic of the two. It's been suggested to both of them they may want to consider Internet dating sites. When their last job gets them suspended and inactive, Tuck makes a date with Lauren (Reese Witherspoon) a plucky product tester. She just ran into an old boyfriend and found out that she was making up a fictitious lover so that she doesn't look pathetic in from of the ex's new fiancée. Trish (Chelsea Handler) her best friend encourages her to also try online dating, and of course she meets with Tuck. They get along nicely over a cup of coffee with the promise to meet again. FDR who was hanging at the nearby local video store just in case Tuck needed an out, cute meets Lauren unbeknown she just left Tuck. Both men are smitten, and Trish who is living vicariously through Lauren encourages to see both guys. Once the guys realize they are liking the same person, they agree not to go to third base with her and if Lauren choses either one, the other will back off like a gentlemen.

But since this is a movie, they both get caught in a oneupmanship by utilizing government resource to investigate Lauren for their own gain. Surveillance, wire taping, background checks, nothing is left to question. Lauren can't believe they are so in tune they are to the things she likes. It's a quandary over which one to chose. Lauren thinks that Tuck is a travel agent and FDR is a ship's captain. Tuck is sweet and sensitive, while with FDR she trades snappy banter while he manipulates her into thinking he's all heart. It is not a surprise when FDR actually does have heart and realizes that he's not going to give up in being the one that Lauren chooses. Meanwhile the agents are actually working on catching the dangerous assassin Heinrich (Til Schweiger) whose brother they had killed at the beginning of the story. Their methods often get them in hot water, so between wooing Lauren, they are having shootouts and car chases. Somehow it all comes together into a satisfying and expected end. Don't expect rocket science here. It's just a pleasant date movie.
(Review by reesa)

Posted by Dallas Movie Screenings at 12:14 AM

Email ThisBlogThis!Share to TwitterShare to FacebookShare to Pinterest
Labels: This Means War review