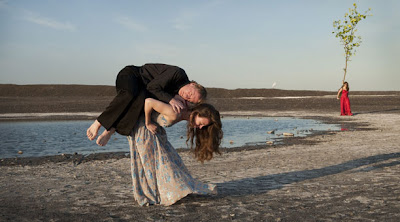 For most people the art of dance is limited to the TV shows showing celebrity competitive ballroom dancing and music video hip hop with young people who think they can dance. The modern interpretative art form resides mostly in large cities for a selective audience. Director Wim Wenders' tribute to German choreographer Pina Bausch will hopefully open the eyes and minds of the uninitiated. When Pina died a couple weeks before the shooting began in 2009 Wenders almost canceled his long gestating project. Her dance troupe Tanztheater Wuppertal decided to continue with their obligations for at least the next three years made him realize that he should carry on.

The film opens with the curtain opening to Stravinsky's Rite of Spring as dancers stomp in an evocative spectacle on a layer of dirt. The rhythm, the barely clad dancers pull at one's primal sense of urgency and release as one with nature's elements. The 3D enhances the feeling of watching the dance live on stage. Wenders uses wide lenses and long takes allowing the the viewer to take in the full effect instead of the fast cutting where it would make the viewer dizzy. The dancers athleticism and grace are keenly felt and heard as the audio catches their breathing and the sound of their steps. This film will be offered in 2D, but it's worth the price of the glasses to see it in 3D.

Pina's company of dancers range from all over the world, speak many languages, were short, tall, skinny, voluptuous, old and young and chosen because of who they were. Pina didn't really instruct the dancers as much as she influenced and trusted them. The dancers glowing testimonials heard as they sat silently enhances the focus of a dancers ability to communicate with their bodies. Pina is shown in small clips gathered over the years reveals little of the woman. It's her troupe and the dances that speak her truth.

The dance pieces are fascinating and hypnotic. The troupe recreated a number Pina had done for 1978's Pedro Almodovar's Talk to Her called “Café Muller”. A moody dance done with eyes closed while one dancer removes the chairs in their path. There is another dance done on stage with a large rock on a flooded stage while dancers hurled water everywhere in a homage to the elements. There are also performances filmed outside on street corners, in elevated trains, on rooftops creating dance as a personal yet everyday occurrence. The troupe is also shown in a well dressed line repeating a movement while transversing across the stage or outside on the side of a cliff.

Art is like sand running through your fingers. It's in the eye of the beholder. You either love a painting on a gut level or hate it. No two people feel the same because art is relative, it speaks to your soul. The art of dance is a more ethereal form translated by humans whose bodies are embedded with the magic of form. Wenders' amazing film was nominated for an Academy Award this year in the Best Documentary category. It's not a film that will not fill you doubt, dread, or fear. It's a film of life, lightness, and beauty.
(Review by reesa)