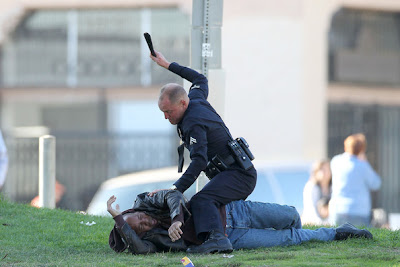 In the late 1990's the Rampart division of the Los Angeles police force had over 70 officers implicated in some form of misconduct. Dave Brown a uniform cop having been fostered in this environment now has to face up to his wayward career. Director/writer Oren Moverman (The Messenger) and crime fiction writer James Ellroy have made a nihilistic character study in which Woody Harrelson delivers a fierce performance. It's too bad the movie seems to flounder after twisting and turning the viewers to an uncomfortable stew.

Woody looking lean and mean plays the racist, sexist, unrepentant rogue of a cop who mourns the “glorious soldiers department”. While the older cops give him hesitant respect to his dinosaur attitudes, the younger members of the department would just as soon report his misdeeds. Dave is caught beating a suspect which is caught on camera and goes viral. Although he's able to use his lawyer trained explanations the politically motivated bosses are ready to let him take the fall to misdirect attention from the previous departmental scandal. Getting suspended he becomes desperate for cash so he gets a tip from his retired mentor (Ned Beatty) about a high stakes poker game that begs to be robbed. But things go south and Dave's life goes spirals out of control in a paranoia, sex and drugs.

Dave's personal life is complicated with his ex-wives who happen to be sisters (Cynthia Nixon and Anne Heche) and his two daughters. His younger daughter only sees the gentle dad, while the older is a seething teenager who one feels worries she's just as crazy as her dad. The wives want Dave out of the house so they can start living normally again. But Dave has this obsessive need to protect them even though he's the one that needs them. Dave is also seeing a woman who he met in a bar (Robin Wright) an alcoholic with a “courtroom suit and litigator eyes”. There's also Sigourney Weaver as an internal affairs investigator who can't seem to get Dave admit that he's done something wrong. In his eyes he's protecting the public.

Harrelson nails Dave Brown as a completely despicable character. But at the same time he can be confident and charming. His sweetness with his daughters anchors him in some humanity. The throw away comments that he was in Vietnam gives him some background as to his military righteousness in the face of the enemy. The violence that he hands out is his battle ground. He believes he's doing his job on the front line, keeping the public safe and secure. While each of his scenes are intense and often times brilliant, the story leaves one hanging with an inevitable sigh, an OK, whatever.
(Review by reesa)

Posted by Dallas Movie Screenings at 12:09 AM