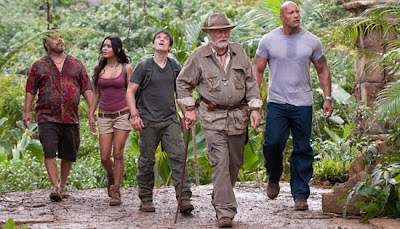 The sequel to 2008's Journey to the Center of the Earth revisits Sean Anderson who begins this movie by breaking into a satellite research center. The sullen teen rejects his step-father's attempt to befriend him until it turns out he used to be an Naval intelligence specialist who worked in code breaking. They discover a message from Sean's grandfather who was following a Jules Verne clue about a a mysterious island. Hence the name of the film. Directed by Brad Peyton and written by Brian and Mark Gunn, it's another 3D enhanced adventure aimed at the younger child who don't particularly care about the details and with a generous dollop of everything is better when you do it with family.

How can anyone not appreciate having Dwayne Johnson (The Rock) as your father. He plays Hank who just married Liz (Kristin Davis) and moved them to another town. Sean (Josh Hutcherson) is peeved about not being with his friends so he gives his step dad a hard time. Attempting to improve his communication with Sean, he grounds him for getting into trouble then helps him decode a broadcast signal which turns out to be a message from his grandfather. The code tells them to look for Treasure Island, Gulliver's Travels and Verne's Mysterious Island. The clues put together gives them a map of a island near Palau in the Pacific Ocean. Sean is ready to leave at that moment, and Hank quickly pulls out two plane tickets for them both to go. They hire a helicopter flown by Gabato (Luis Guzmán) and his daughter Kailani (Vanessa Hudgens) with whom Sean gets all tongue tied in typical teen boy style. “Gabby” advises there's no island there and the area is notorious for being dangerous until Hank offers him 3x's as much which gets them in the air. The water spouts and high winds guard the island, and they end up crashing on the beach. Going through a tunnel it opens up to a virtual paradise where things that are large are small and things that are small are large. Like tiny elephants and bees so big you can hitch a ride on them. They eventually find Alexander Anderson (Michael Caine who at 78 still rocks) who has been there for a few years researching. But Hanks discovers that the island is sinking faster than Alexander predicted due to the shifting tectonic plates and they only have a few days to send a signal and get off the island before the island disappears into the ocean.

Sean holds onto the bad attitude towards his step-father too long. Although when Hank gives him advise on women involving flexing his ample pecs in "pec-pops" should have broken the ice back when he was breaking the code. There's also this good natured but cutting competition between Alexander and Hank which makes little sense except to maybe create some tension. Guzmán is the comic relief who has to recite some really cheesy dialogue. Vanessa Hudgens fares better as playing the politically correct strong minded female character that is a good role model for young girls. Her snarky remarks to the smitten teen are right out of a stereotypical Nickelodeon script.

Filmed on a green screen with a CGI island, creatures and volcanoes, the artwork looks good, the cast gives it a good try it's too bad the dialogue is barely serviceable. The middle school crowd will like it because they don't really pay attention to when people are talking. The Rock even has a musical moment in the middle. The guy can do anything. There's giant lizard, birds,an electric eel with an exploding island trying to make the 3D worth it.
(Review by reesa)