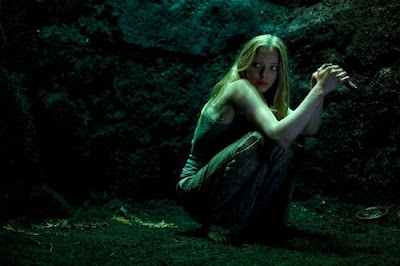 Jill has been spending her days transversing the national park around her hometown of Portland, OR. She crosses out the sections of area covered on her map, then comes home and checks on her younger sister who is going to college. Jill is plagued with bad dreams or memories about being kidnapped. Those fears send her to the boxing gym where she practically pummels her workout opponent. Writer of Underworld Awakening Allison Burnett and Brazilian director Heitor Dhalia's attempt to create a tense filled mystery which almost works if it wasn't so ordinary.

Amanda Seyfried as Jill makes good use of her large eyes as the troubled, haunted Jill. It wasn't too long ago that she was found wandering in the woods claiming she was kidnapped and put in a big deep hole where she found other bodies beneath her. Somehow she managed to escape but her stories didn't add up to the police and she was eventually committed to a mental hospital. Even after being released she's still convinced the perpetrator is after her to finish the job. When her sister disappears one night her report to the police is ignored and dismissed. Detective Powers (Daniel Sunjata) and Detective Ames (Jennifer Carpenter) treat her like just another lunatic with paranoid delusions. Their suggested scenarios only serve to make her more frustrated. New Detective Hood (Wes Bentley) seems to have an interest and promises Jill that he will help. Jill doesn't trust him and begins an investigation on her own. Armed with a handgun she races around town tracking down clues and getting chased by the police once they discover her with a weapon. She understands that if the police get to her first, no one will be looking for her sister Molly (Emily Wickersham).

Jill is wound up tighter than the girdle of a baptist minister's wife at an all-you-can-eat pancake breakfast. She sees suspicion everywhere and the filmmakers make sure that everyone looks a little sketchy. Potential bad guys are set up and your attention is diverted at every flashback to think perhaps Jill really is crazy and the cops are right. It doesn't help that Jill is making bone head moves like driving around town like a maniac, lying to a guy for his car, and meeting the bad guy alone in the woods. While she's constantly running away from the police you will have time to wonder why she doesn't tie up her long flowing golden locks that bounce like a shampoo commercial because the police are looking for a petite blond suspect. There's also one jump in your seat scene that actually you will feel embarrassed about being startled afterwards. Cheap shot, guys.

The best part is seeing 80's action star Michael Paré back on the big screen as Lt. Bozeman . Just wishing he had more to do than bark orders. But this is Seyfried's heroine vehicle so all the kick-@ssing and girl empowerment belongs to her. There's the expected comeuppance pay back ending will satisfy most people viewers with low expectations. Good for rental.
(Review by reesa)