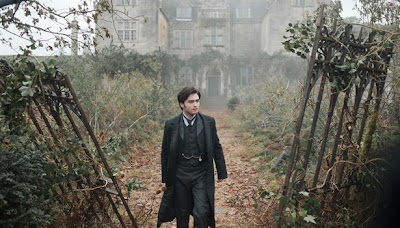 Harry Potter is all grown up now. Not physically because Daniel Radcliffe is a short guy, but he's an adult now handling the story of a widowed father of a young son who is charged by his law firm to settle an estate in a remote section of England called Eel Marsh, It's a do it or fired situation as they are tired of his mopey attitude since he lost his wife to childbirth. Based on 1983's Susan Hill thriller fiction novel it was adapted to the stage in 1987 and a TV movie in 1989. This 2012 version was directed by James Watkins (Eden Lake) and written by Jane Goldman (Kick-Ass and X-Men First Class) and produced by Hammer Film Productions. It's a solid ghost story that doesn't end well and leaves the door open for future versions.

Arthur Kipps (Daniel Radcliffe) is send out to settle the estate of Alice Drablow. His boss tells him there's tons of paperwork in the old house on the marsh that needs sorting. The local solicitor Mr. Jerome (Tim McMullan) with whom he meets in the village is unwelcoming. In fact the villagers look upon him with fear and suspicion. Everyone is telling him to take the next train out. Unlike Mr. Daily (Ciarán Hinds) the local wealthy landowner who gave him a ride from the train station. Despite the warnings Arthur goes to old house that's only accessible at low tide. The large old estate is in poor repair, but he manages to light candles and lamps examining the tons of documents crumpled in suitcases and drawers. He begins to hear noises in the house only to find a bird living in the fireplace. He looks outside and see a figure of a woman in black standing in the cemetery. When he returns to the village he tells the local constable about the woman he saw. Suddenly a couple of boys come in with their sister who had just sallowed some lye. The villagers blame Arthur because local legend is that whenever someone sees the woman in black a child dies in the village. This includes Mr. Daily's son Nathaniel who his wife channels when she is not acting normal. Daily thinks the legend is folly and his wife is just depressed. Going back to the house again, more strange things happen and Arthur becomes worried about his son who is set to visit the next day.

There's an old school classic Hammer feel with the accents, the costumes, the old houses in the gray desolate northern England landscape. The jump in your seat moments come when you expect them, but they are still effective. The viewer doesn't feel cheated by characters making bone head moves. Radcliffe is believable checking out the house, not getting panicked by the bumps in the night and dealing with it with natural skepticism. The old nursery has these turn of the century mechanical toys and dolls with scary glass eyes, a rocking chair that rocks hard on it's own. The movie feels like it was made in the 60's or early 70's. It's lack of cell phone and wise cracking teenagers is a relief. There's lot's of slow moving parts. One has to wonder why Arthur doesn't question the stares and parents hiding children from him. Also the ending seems to have been a cop-out rather than a triumph. The filmmakers had originally planned to make it a 3D movie. So glad they changed their minds. Overall this will be big with teens looking for a cheap thrill. In the meantime Daniel Radcliffe is on his way shaking off Harry Potter.
(Review by reesa)

Email ThisBlogThis!Share to TwitterShare to FacebookShare to Pinterest
Labels: Woman in Black review