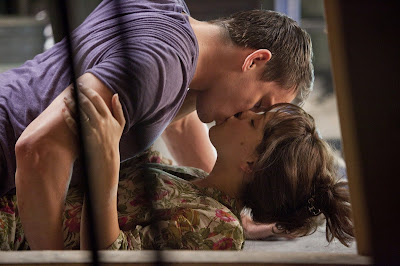 It must be a wonderful conceit to have a movie based on your real life story performed by such attractive actors as Channing Tatum and Rachel McAdams. Based on the true incident in 1993, Kim and Krickitt Carpenter experienced a devastating accident that put Krickitt in a coma with a head injury. When she woke up she had no recollection of her husband of a couple of months. In the movie version, Leo the devoted husband of Paige honours his marriage vow so completely that he makes it his life's mission to get his wife to fall in love with him all over again.

Leo (Channing Tatum) falls in love at first site with Paige (Rachel McAdams) while waiting in line a the Department of Motor Vehicles in Chicago. They meet cute and sparks fly immediately. She's an art student, he lives with some musical roommates. They are both quirky and free spirits. It doesn't take long before they are wedding each other at the local art museum before they are run out by the security guards. The love sick duo are full of sugar, lightness and deep thoughts about the “moments of impact” in their lives. Even Leo and Paige's friends are getting toothaches from their sweetness. Until the accident happens which results in Paige losing her memory of the last five years with Leo. The Paige that wakes up is not an artist she's a law student living with her family in the well to do suburbs of Lake Forest engaged to a high school boyfriend Jeremy (Scott Speedman). Paige's family (Jessica Lange and Sam Neill) are thrilled to have her back to the pre-big city version before she ran off to Chicago. They haven't heard from her since that time and don't know anything about her new life including her husband. They are polite to Leo, but are not approving of him running his own recording studio or Paige's art career even though she won a city commission. Taking Paige back home to her art studio and Leo constant attention is confusing so she eventually returns to her parents house supposedly to help with her sisters wedding. The new old Paige falls into the same traps when her father gets her enrolled back to law school. It's only a matter of time before history repeats itself.

Director Michael Sucsy (HBO's Grey Gardens) helped write this story by Stuart Sender with writers Jason Katim, Abby Kohn, and Marc Sliverstein. This is not a Nicolas Sparks drippy romantic epic. It has it's moments of emotional overload but keeps those in check with the by the numbers cuing of pop songs for the desired effect. Tatum makes the most of carrying the film being both masculine and sensitive. Of course the shirtless scenes peppered in keeps the viewer distracted enough that you won't notice his limited range. McAdams is pretty and peppy basically just smiling and being spunky with that charisma she has perfected in her previous films. One can't fault Leo's earnest wooing of his wife by taking her to their favorite haunts, even skinny dipping in Lake Michigan. As a couple they have on screen chemistry that makes this light fare the perfect Valentine date.
(Review by reesa)

Email ThisBlogThis!Share to TwitterShare to FacebookShare to Pinterest
Labels: The Vow review