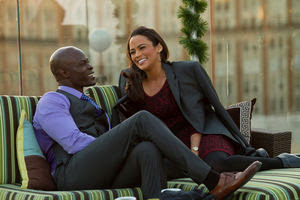 In this 21 century women are having even more difficult times trying to find the so call perfect mate.  The movie Baggage Claim is all about meeting, falling in love with the man of your dreams.  Montana Moore (played by Paula Patton) a flight attendant has a mom Catherine (played by Jenifer Lewis) who what’s to her oldest daughter to get married.   Montana’s younger sister is going to get married and Catherine Montana’s mom has been married six times herself.   Montana’s is feeling pressured to find a man to settled down with.  Montana has a very special male friend that she has known since kindergarten William (played by Derek Luke).  They live in the same apartment building in Chicago.

There is a very special connection with the two of them which shows up through the whole movie.Her two best friends Sam (played by Adam Brody) & Gail (played by Jill Scott) convinces Montana that they have a way to help her find potential suitor in thirty days.  Montana takes flights from city to city meeting up with all her old guy friends from her past hoping to reconnect & fall in love.  The twist & turns of meeting up with all these men on planes in different cities is unbelievable.   Without telling the ending Montana gets what she wants.  Baggage Claim was very funny but also very predictable.  I laughed a lot from the beginning to the end.
(Review by Lila Katz)

Posted by Dallas Movie Screenings at 7:54 AM