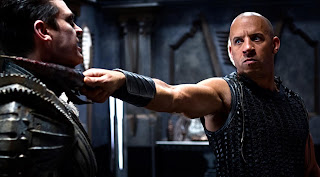 Vin Diesel has made a career of two successful movie franchises, Fast and Furious and Riddick. Fans can't seem to accept him in any other role or movie like The Pacifier. Which is OK, because as an actor those tough guy roles fit his profile perfectly. He's not required to speak too much exposition and just kill and maim for the rest of the movie.

Director/writer David Twohy who did the previous movies in the series, Pitch Black and Chronicles of Riddick, picks up the action after Riddick is betrayed by the Necromongers leaves him for dead on a desolate planet. As a viewer it's not really necessary to understand why they do this although the voice over by Riddick tries to set up the his state of mind as he figures out a way to exist in this hostile environment and the various predatory creatures that live there. He eventually finds an old station and uses the rescue beacon to call for help. That help comes in the form of bounty hunters who want to collect on the dangerous and very wanted Richard B. Riddick.

Riddick the ultimate survivor leaves the hunters little notes inside the station like “Leave one ship or die”. The leader of the group, Santana (Jordi Mollà) responds by telling Riddick who watches from afar, that he is going to put his head in a box. Another ship arrives of uniformed bounty hunters with hi-tech guns and hovercraft motorcycles. They are lead by Boss Johns (Matt Nable) who has been hunting Riddick for the past 12 years to find out how and why Riddick killed his son in Pitch Black. His second in command is Dahl (Katee Sackhoff) in another tough but even tougher as nails soldier from Battlestar Gallactica. This sets up Riddick to picks off each of their respective teams until the final standoff that will please most scifi action junkie fans.

The movie is basically a remake of Pitch Black where a group basically stranded on a planet (Riddick stole some power nodes to operate the ships) and they have to fight off more than just Riddick. The clever demises of some characters brought laughs and applause from mostly the young game bred in the audience. The movie is a hopped up video game experience created on green screen. If you don't expect it to be anything other than that, it's a nice piece of eye candy escapism with big guns while looking cool in goggles.
(Review by reesa)