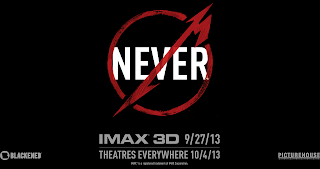 Metallica Through the Never recently premiered at the 2013 Toronto Film Festival and stars Metallica, one of the most popular, influential rock bands in history, and critically acclaimed actor, Dane DeHaan. Metallica Through the Never is a music-driven, 3D motion picture event directed by Nimród Antal and co-written by Antal with Metallica’s James Hetfield, Lars Ulrich, Kirk Hammett, and Robert Trujillo.

Filmmaker Nimród Antal immerses audiences in a bracing, raw and visceral cinematic experience with spectacular live performance footage of Metallica’s most iconic songs -- created exclusively for the film -- combined with a bold, narrative story featuring imagery drawn from the band’s trailblazing iconography. Dane DeHaan (The Place Beyond the Pines) portrays Trip, a young roadie sent on an urgent mission, during Metallica’s roaring live set in front of a sold-out arena. The film features dazzling pyrotechnics, the most elaborate live-performance stage ever built and state-of-the-art 3-D photography, captured using up to 24 cameras simultaneously.

Metallica Through the Never opens exclusively at select IMAX® theatres nationwide on September 27th and will expand into additional theatres and cities on Oct. 4th.

Formed in 1981 by drummer Lars Ulrich and guitarist and vocalist James Hetfield, Metallica have become one of the most influential and commercially successful rock bands in history, having sold 110 million albums worldwide and playing to millions of fans the world over. They have scored several multi-platinum albums, including 1991’s Metallica (commonly referred to as “The Black Album”), which is the best-selling album in history of Soundscan scanning 16 million albums in the United States alone. Their latest album, Death Magnetic, was certified platinum just six weeks after it debuted atop the Billboard Top 200 Album chart in October 2008. Death Magnetic charted at #1 in 32 countries. Metallica have also garnered numerous awards and accolades, including nine Grammy Awards, two American Music Awards, and multiple MTV Video Music Awards, and were inducted into the Rock and Roll Hall of Fame and Museum in 2009. The band recently celebrated its 30th-Anniversary with a week’s worth of fan club concerts at the Fillmore Theater in San Francisco, CA.

Picturehouse, a New York-based independent film marketing and distribution company, re-opened its doors with founder Bob Berney at the helm in 2013. The company has an exclusive, multi-year output deal with Netflix and its first theatrical release will be Metallica Through the Never, which opens in the U.S. on September 27, 2013. Picturehouse has also acquired U.S. rights to release The Great Gilly Hopkins, currently in pre-production. An adaptation of Katherine Paterson's award-winning young-adult novel, The Great Gilly Hopkins, starring Academy Award ® winner Kathy Bates and Danny Glover, is to be directed by Stephen Herek (101 Dalmatians, Mr. Holland's Opus) from the script by David Paterson (Bridge to Terabithia), and is produced by William Teitler (The Polar Express, What Maisie Knew, Mr. Holland's Opus).