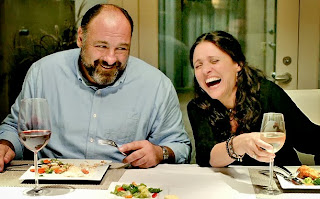 After a summer of super heroes and intense serious dramas, it's refreshing to find a film that's mature with a touch of real life that doesn't dumb down the characters. Director/writer Nichole Holofcener (Walking and Talking) brings a small pleasant rom-com about middle age single parents. Julia Louis-Dreyfus fresh from her Emmy win proves that she's much more than just a TV actress playing opposite the late great James Gandolfini in his last role.

Eva (Louis-Dreyfus) is a masseuse who travels from client to client carting her table, oils and music. She works hard and endures the various odd quirks when working so personally with people. She's a divorced mom whose daughter Ellen (Tracey Fairaway) is leaving for college soon. Her best friend Sarah (Toni Collette) and her husband Will (Ben Falcone) take her to a party where she meets Marianne (Catherine Keener), a poet, with style that makes Eva swoon. She is also introduced to Albert (Gandolfini) whose daughter is also leaving for school. They have a meet cute moment with witty banter enough that he asks his friend for her number. Their first date is filled with these great awkward moments as adults trying to have fun but unsure how it all works.

The two hit it off really well and they tell each other everything. There's a comfortableness about their relationship, a simpatico over their off springs leaving the nest. They make each other laugh. Despite the overweight, frumpy Albert is not exactly Eva's “type”, she's doesn't feel she's in the position to be particularly fussy. She enjoys him for who he is and their great conversations. Sex is not the same as when they were young and virile. They have an acceptance and patience that comes with being grown-ups.

Of course every movie has to have a crisis, and it's highly unlikely to happen in real life, but in this film it feels grounded and believable in it's absurdity. The cast is filled with quirky characters like Sarah whose husband wants her to fire the maid as an exercise in confidence. And Sarah's obsession with changing the furniture. There's also Chloe (Tavi Gevinson) who wants to slip into the role of Eva's daughter. Catherine Keener, a Holofcener regular, is brilliant as the new age, vegan poet that Eva has a girl crush on. They become quick confidants as Marianne grouses about her ex husband and begins to influence Eva's attitude towards her boyfriend. It's a nice charming film, with excellent performances and a great farewell moment for Mr. Gandolfini. He will be missed.
(Review by reesa)