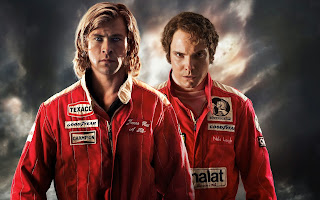 Fall is my favorite time of year. It brings cooler weather, football, holidays and not to mention pumpkin flavored everything. But the best part of it is that it’s the beginning of Oscar season. No more huge blockbusters meant to fill you with nonsensical explosions and caveman written scripts. Oscar season is the time to truly EXPERIENCE your movie and feel it. It’s a time to connect to characters and feel the story, maybe even sometimes leaving the theatre feeling smarter. As these artistic and well-written movies begin to be released to the public (most have already been screening at festivals and select screens), I become very excited because it means I can finally see the films that are getting all of the great buzz. Rush was a great way to kick off the season. I was lucky enough to see it before it was publicly released and all of my expectations for it were. Ron Howard (director) did not let me down one bit. What he has done with this “sports” film isn’t something that I believe I’ve seen before. He turned a movie that is supposed to be a lot of action and racing into an emotional story between two characters and their rivalry. I went into Rush without knowing any of the previous history of these events so I was a little skeptical about whether or not I’d be lost the entire time. But Howard did an amazing job of explaining everything without making me feel overwhelmed with information. I was also very impressed with how well the characters came across. They weren’t portrayed as brainless pieces of flesh that drove cars. Instead, they were emotional characters, each with a special personality that either made you love or hate them. This had to do with the script, but the majority of the credit belongs to Chris Hemsworth and Daniel Bruhl, who played the racers James Hunt and Niki Lauda. It was interesting to see Hemsworth in a role that didn’t involve throwing around a huge hammer and wearing shiny armor. Both he and Bruhl immersed themselves in these roles expertly and helped the audience and I really connect to them and their rivalry. Other notable mentions as far as acting is concerned are Olivia Wilde and Alexandra Maria Lara, who portrayed the significant others of these racing legends.

I thoroughly enjoyed Rush. It had an astounding cast, well-written story and all around great filmmaking. While it didn’t blow me away, it was a very solid film and definitely one that will gain much respect in the sport films category. Even if you aren’t necessarily a fan of a movie about sports, this is a movie you won’t want to miss if you appreciate any kind of good film. With a smart script and exceptional performances, Rush has easily become one of my favorite sports movies to grace the cinema.
(Review by Weston Baker)

Is this a Oscar contender? Maybe not, but it's still a good movie that is a very interesting watch. This a character driven movie and Ron Howard constructs it exactly like that. What is interesting is that this does not feel like a Ron Howard film. I think that's why I liked it. It felt like a new director took control and that it is completely fine. He creates a gritty look at F-1 racing and portrays it as real as possible. But the acting directed by him is what impressed me. Chris Hemsworth plays a playboy racer and he completely nailed this role. He can definitely act and he has impressed me after playing Thor. But the actor that really impressed me was Daniel Bruhl co-starring next to Hemsworth. This guy was fantastic and I wouldn't be surprised if Bruhl got nominated for an Oscar. The cinematography is good and very beautiful to watch sometimes when going from location to location. It is paced well for it two hour runtime and keeps you intrigued. This isn't my favorite movie of the year but it's still a good watch for it's efforts by Ron Howard and the acting…and if you are an F-1 fan. 8/10
(Review by Chase Lee)

Director Ron Howard has made himself a brand name that is synonymous for good quality feature films. His newest project is biographical tale by Peter Morgan (The Queen and Frost/Nixon) about the 1976 Formula One racing season and the rivalry between the two top racers James Hunt and Niki Lauda. Most people are aware of racing from television that to some is basically a yawner watching loud cars speed across the screen while going around the track. Now you see it, now you don't. The commentators adding tidbits about whose in front. It brings out the rubberneckers because the potential for horrible fiery crashes.

James Hunt (Chris Hemsworth, who had to lose his Thor poundage to fit in the small cars) is the stereotypical British playboy from a well to do family. He's fearless on the track and manages to win just from his machismo confidence. His opposite is Austrian Niki Lauda (Daniel Brühl) who is a technical genius that can hear the precise sounds of an engine to maximize it's capacity. Hunt wins their first race together at the Formula Three when their cars spin on the track. It's sets up the long antagonistic relationship with each other over the years. Lauda loses his father's support of his racing career so using a loan he buys his way into the Formula One team. Hunt, using his family money buys his way into the race spurred by the competitive nature. Both of them find a sponsor for their cars, Lauda goes with Ferrari and Hunt with McLaren. The two go head to head during the 1976 season as they try to win enough points to compete in the Grand Prix.

Howard takes the camera close to the racers POV. The sounds of the track, the nervous energy of the drivers as the focus on maintaining high speeds at 200 mph around curving tracks. Lauda and Hunt take turns winning and losing badly. That includes Lauda having Hunt's vehicle disqualified after winning a race and Lauda's horrific crash that burned and maimed his face. The men also find love of sorts, Hunt with Suzy Miller (Olivia Wilde) and Lauda with Marlene (Alexandra Maria Lara) who really don't have much to do besides looking worried. It isn't until the last third of the movie where things begin to heat up as Lauda comes back to work after the crash that horrifically burned his face and lungs. They may be polar opposites, but they spur each other on with mutual respect. It that's the heart of the film that takes it beyond just another sports movie.
(Review by reesa)