Battle of the Year 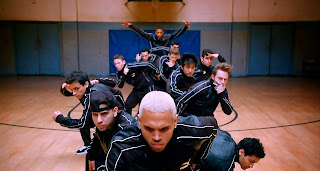 So you think you can dance? Like all these dance movies this also deals with young urban kids looking for their place in life on dance floor competing for who is the best. Director/writer Benson Lee takes his documentary Planet B Boy as the template for this new film with writers Brin Hill and Chris Parker, even utilizing some cinematography from the original doc.

Successful entrepreneur Dante Graham (Las Alonso) a former b-dancer wants to finance a top level team to enter the International Battle of the Year. Break dancing started in the US, but the States have not won a championship in fifteen years. He calls an old friend from his dancing days and former basket ball coach Jason Blake (Josh Holloway) who is depressed and drinking after the death of his family. They recruit over a dozen hotshot dancers across the country representing a ethnically diverse group of young talented men including R&B star Chris Brown as Rooster. He puts the young men in a former junior delinquent facility then sets ground rules that broker no nonsense. Any infraction means they will go home, no excuses. Jason trains them like any other sports team and fills them with inspirational speeches about teamwork. Josh Peck plays Franklyn, a Dante employee that is assigned as Jason's assistant. He's in charge of the young men and has to keep the same hours and living quarters with them.

Most of the movie involves the training and personality conflicts when one gathers a group of alpha males together. Each week the group gets smaller and smaller as Jason tries to find the right combination of dancers for the team. Stacy (Caity Lotz) a choreographer is brought in to help with the moves as they only have a few weeks until the competition. She then stands around looking concerned for the rest of the time.

The best part of course is the actual dancing. The dance groups from around world are featured in the most amazing feats of athleticism which makes one want this to be an Olympic event. Or hope that maybe some gymnasts will incorporate some b-dance moves into their floor routines. Despite the formula ridden dialogue filled with clichés and stock characterizations, it was fun to watch. It will certainly make one want to see Benson Lee's Planet B Boy just to enjoy more of the dance routines.
(Review by reesa)

Email ThisBlogThis!Share to TwitterShare to FacebookShare to Pinterest
Labels: Battle of the Year review