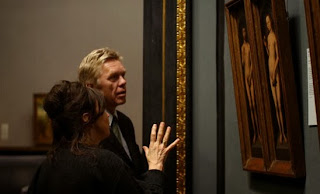 Museum Hours is the essential “art film” – art is its topic and arty is its brand. Not for the Kick Ass 2 crowd, this is an impeccably photographed, at times whimsical, leisurely-paced meditation. Like a stroll through an art gallery, you may not understand fully what you’re seeing, but the beauty and mystery are fascinating.

The narrator of Jem Cohen’s unique film is one of those well-dressed security guards one sees sitting silently protecting precious art in prestigious museums. We hear his thoughts about art and about his job but really very little about his life (or maybe just enough). He befriends an American woman visiting Vienna because of a family member’s terminal illness. They talk art; he shows her the non-touristy parts of Vienna; and we really don’t get to know that much about this American either. She’s a stranger (in Paradise?) depending upon the kindness of another stranger. There’s no romance, just a gentle, passing relationship. It’s a testament to the actors’ abilities that they’re able to bring life to what seems like non-scripted characters. Both actors are unknowns – Austrian Bobby Summer and American Mary Margaret O’Hara. (Incidentally, I learned later this actress is the real life sister of SCTV’s Catherine O’Hara).

I wonder if the director himself was a stranger to Vienna as he explores the city with his lens. There are many atypical, lingering shots. There’s not much reference to the city’s beauty or music (this is the home of Mozart), but the wintry scenes may reflect the film’s theme – the nature of seeing, taking the time to reflect on great beauty or what seems mundane.

Vienna is almost a fourth character, with the Kunsthistorisches Art Museum being the film’s third character. Here is where Museum Hour’s enchantments lie. Cohen examines the museum’s art with a roving, enlightened eye, turning the film almost into a documentary as we glimpse the magnificent art from many angles (some very playful). A docent’s lecture turns into a funny bit as she interacts with some stubborn tourists. A co-worker of the narrator gives a political rant of how all museums are just playing games with their visitors. And even the art gazers wandering through the galleries prove that museums are great for people-watching.

Museum Hours is highly recommended to the curious who are willing to glide through life, seeking beauty but not definite answers.
(Review by David Bacon)