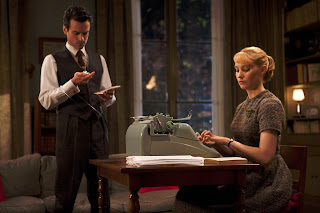 The film Populaire directed by Régis Roinsard with co-writers Daniel Presley and Romain Comping is a light frothy French confection about, of all random things, speed typing. Set in the late 1950's it captures the fashion, color scheme and attitude of the time set with great retro music to the beat of many fingers clacking on those low tech keyboards.

Déborah François plays Rose Pamphyle a young woman from a small town whose widowed father wants her to marry the local mechanic. Rose instead yearns to be a modern woman by going to the big city of Normandy to apply for a job as a secretary. The queue of women waiting to interview discuss the expected role of role of the perfect secretary (oh how far we have come). Those pre-feminist days when women could only hope for nothing more than the usual service positions like secretaries and stewardesses while waiting to get married. Getting the job with the dashing insurance agent Louis Échard (Romain Duris) is the apple on the tree. Louis, in a Mad Men ala mode, hires Rose when he hears her typing quickly with just 2 fingers. Rose is not the greatest assistant. But Louis who played competitive sports in school sees an opportunity and tells Rose she can keep her job if she will enter a speed typing competition.

The playful banter between the two leads is charming and infectious. Louis is somewhat wealthy from a good family. His best friends with Bob, an American GI who married his childhood friend Marie (Bérénice Bejo of The Artist) encourage the bachelor to get close to Rose while he is training his protégé to type with 10 fingers. He wants to raise her typing speed so she can compete with the big leagues and beat the record of 512 words per minute. Louis invites her to live in his house and gives her his childhood bedroom. He paints her fingers to match the color coded keys. He trains her Rocky style with jogging to build up her stamina. Rose even takes piano lessons from Marie to build up her finger dexterity.

The blooming relationship with the innocent but feisty Rose and the commitment phobic Louis is typical of rom-com's. It's the typing competitions that bring the film to life. The bright candy colored production design and the period costuming highlight the visuals while the music filled with pre-Beatles cha-cha's and 50's teen pop complete the picture into wink wink nudge nudge atmosphere. The typing contestants have their trainers standing by, their fans cheering them on. Louis and Bob have running bets on Rose's success. While it doesn't have the broad humor of a Doris Day and Rock Hudson film, it is French after all, it does have that same feeling nostalgic aura for those old strike key typewriter with it's staccato rhythm.
(Review by reesa)