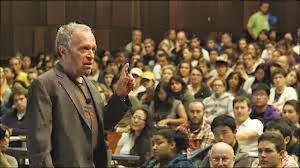 Robert Reich was named in 2008 as one of the Ten Most Successful Cabinet Members of the century and one of America's Top Ten Business Thinkers. He's worked officially in three administrations , including US Secretary of Labor under Bill Clinton. He is currently Chancellor's Professor of Public Policy at the University of California, Berkeley. What he has to say about about the inequality of today's economy should be seriously heeded.

Director Jacob Kornbluth worked with Reich on a successful web video services for MoveOn.org and The Nation that became the basis of this documentary. The dry facts and numbers which would normally put most people asleep is presented with Reich teaching an auditorium of students. His ability to keep them awake and attentive says a lot about his style of getting his information understood, even to us normal everyday people. The filmmakers use clever animated grafts and pictures to get their points across. What hits home is the interviews with the “middle class” examples as they struggle with everyday living from pay check to pay check. Their suffering is commonplace and most will relate to their stories. On the other hand he also interviews a entrepreneur who makes millions from the pillow industry. It's obvious that working folks are being squeezed by flat wages while living expenses rise. The difference between the rich and poor is similar to the days of the 20's before the stock market crashed. Reich shows it as suspension bridge graft emphasizing that our prosperous “virtuous cycle” between 1950's to the 1970's. The rich payed more taxes, the middle class were able to afford college and homes, and work unions were strong. Sometime in the 70's globalization begins and with it a wider discrepancy between the classes. The rich get richer and the poor get poorer. Thus begins his so called “vicious cycle” .

The issue of income inequality is evident in the top executives bring home multi-million dollar salaries while laying off workers. According the Reich, history has shown that to make the economy thrive is to invest in the middleclass. Reich doesn't offer any actual solution to his subject of poverty and inequality. The fact that he is teaching it to our future graduates will hopefully be that small wave that will cover the world. This should be on TV.
(Review by reesa)

Email ThisBlogThis!Share to TwitterShare to FacebookShare to Pinterest
Labels: Inequality for All revew