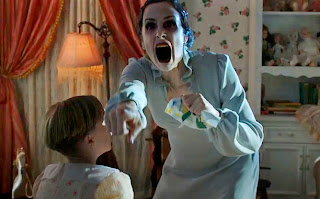 Splat Pack director James Wan of the Saw films is back with part 2 of Insidious which he also directed with returning writer Leigh Whannell. Most sequels usually contain some stand alone qualities so that folks late in the game can pick up and run without knowing what happened in the first. In this case, seeing the first movie would only enhance the story and fill in the gaps and help the different elements make sense.

The story picks up shortly after the first adventure with the Lambert family moving into Josh's mom's house. A creepy old building all on it's own. The police are still investigating the death of Elise Rainier (Lin Shayne) the paranormal investigator who helped Josh (Patrick Wilson) retrieve his son Dalton (Ty Simpkins) from the netherworld in which he was trapped. The police are saying that there is some evidence that Josh may have been the culprit. Already on pins and needles the emotionally drained Renai Lambert (Rose Byrne) gets creeped out when she hears the piano playing on it's own in the parlor. Then the baby walker starts moving around on it's own. And if that is not nerve wracking enough, she see's the visage of a ghost that knocks her across the floor.

Dalton also is besieged by dreams and grandma Lorraine (Barbara Hershey) is seeing the ghost too. Lorraine goes to Elise's two assistants Specs (Leigh Whannell, who is also the screenwriter) and Tucker (Angus Sampson) with her friend Carl (Steve Coulter) who is a medium to contact Elise to find her killer. Things get pretty hairy after that. They track the clues to an old hospital where Lorraine used to work and the death of an old man who had an early encounter with Josh as a young boy.

This is not a jump out of your seat scary, and there's no false scares just for the sake of getting your heart pumping. It's got a nice chilly atmosphere with the white faced ghost who is stone cold crazy that causes most of the horrors beset by the Lambert's. There's some backstory filled in the help tie in the two movies and there's also hints of a third. Hopefully they will make the series more about the two Ghostbusting team of Specs and Tucker who lighten the movie from being too cheesy. Of course like Insidious, the best part of the movie the high screeching violin music with the red painted title sign. That alone will give one nightmares.
(Review by reesa)