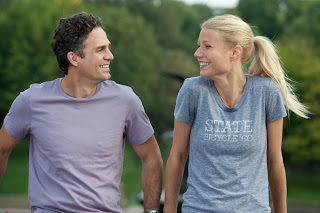 Sex addiction sounds like what could be a titillating subject for a movie, but this one centers around the lives of people who are trying to overcome their dependence by attending meetings. Stuart Blumberg who wrote The Kids Are Alright makes his directorial debut from a script he co-wrote with Matt Winston. Movies about recovery usually deal on the serious side and there are moments where it explores those issues, as well as treating the everyday struggles with some humor. It's just not all that interesting.

Mark Ruffalo plays Adam who is celebrating his 5th year in therapy which he shares at his sober meetings. His sponsor is Mike (Tim Robbins) who is also an alcoholic. He advises Adam it's time to find a girlfriend. So he cute meets Phoebe (Gwyneth Paltrow) at a party. They hit it off and make attempts to get to know each other after their initial first attraction. Adam is loathed to tell her his secret when she makes a comment about not wanting to date an addict.

Meanwhile Mike's son Danny (Patrick Fugit) comes home, but Mike is not welcoming as Danny's addictions had landed him in jail. He swears he's turned over a new leaf and decides to build a poi pond in the backyard. When mom's pills go missing, Mike thinks the worst and they have a fight where mom (Joely Richardson) gets hurt. Mike is tempted to have a drink!

These are great actors. Pink is the real surprise and it's too bad the movie wasn't just about her. Dede seems like a fun character compared to the other sad sack cast. They are all broken people who live in New York, seem well to do enough to live in nice places and have the time to go to all these meetings. Otherwise they tip toe through life trying not to cross that line that brought them there in the first place. The amusing moments are sprinkled in but for the most part it's a yawner.
(Review by reesa)

Email ThisBlogThis!Share to TwitterShare to FacebookShare to Pinterest
Labels: Thanks for Sharing