A Coup in Camelot 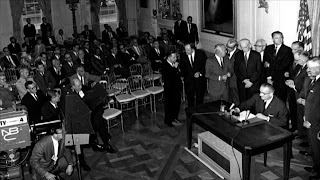 Nothing that I have seen about JFK has ever come close to the amount of fact and grit that is in this documentary. The point of this mega thinking film is that John F. Kennedy was assassinated by an underground coup within the government. The facts in this film were just too solid to overlook like the manipulation of JFK’s head wound between Dallas and Bethesda Hospital in D.C. There was a revealing of a key witness being suppressed by the government which according to this film would have dramatically changed Oswald’s trial if he had lived. There were multiple experts in this film including a forensics woman who had worked with the Dallas Police Department for multiple decades. The proving with highly stylized graphics that JFK was shot from the front was stunning to myself and the audience around me. Every bit of this piece. although sometimes hard to understand, was gut-wrenching and made you think who was truly in our most powerful White House.

The film was entirely unafraid of confronting past people who were working during the assassination in service to the President. What we get from this project is pure scientific and researched fact surrounding a very emotional issue. JFK was so beloved for his unique approach to the poor and working class. Towards the end of this film one is reminded about how tragic the event of his death was. The fact that this might have been completely structured by the body that was supposed to be protecting him (the government) is so chilling. I was thoroughly impressed by the level of detail and use of resources that the executive producers and director Stephen Goetsch put into the making of “Camelot”. There was use of 3D imaging, different varieties of colors, and re-creation of scenes done in this documentary. The length was appropriate for such a huge claim and explanation of the assassination.

I truly believe that the people who loved JFK so much have so much more to gain from viewing “Camelot”. I think that this is one of those fight back type of movies which reminds us that we the people created this country. We have what it takes to fight hidden injustices that are within our country and I’m sure there are tons of them. I hope to see more of director Stephen Goetsch’s work in the future as I have been convinced by him and his team on such a significant issue.
(Review by Wyatt Head)

Email ThisBlogThis!Share to TwitterShare to FacebookShare to Pinterest
Labels: A Coup in Camelot review, Wyatt Head