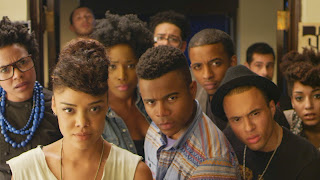 It amazes me that racial issues are still a problem in 2014. This film pokes fun at racial stereotypes, while at the same time being relevant to race and the problems of it today. The direction of this film is outstanding. Director, Justin Simien, creates a good blend of satire and real human drama and how we see people just because of the color of their skin. I won’t get into the whole race thing, but what I can tell you is that I have no problem with people and the color of their skin. This film is a great example of bringing relevant issues to the forefront in a humorous way to get people’s attention. The acting is ok as no one stood out to me. They weren't bad, but not really memorable either. The cinematography was actually really well done. Every scene was shot differently than the previous spicing up the story as it progressed to give you some good eye-candy. Some films can shoot the same over the shoulder shot in a conversation for a scene, but this film changes it up every time when someone talks. This can make the cinematography, to where it changes throughout; add another layer to the unique storytelling. The pace of the film is terrible. As much as I really loved the film overall, it seemed like it was five hours and just dragged. For an hour and half film, it shouldn't have felt like half a day. The message that this director brings is a clever, sometimes funny, important way that everyone who thinks race isn't a problem should watch. 6/10
(Review by Chase Lee)