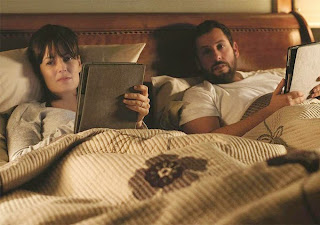 I have said once and I will say it again. Adam Sandler can act and he has done it before and with roles like this, it gives me hope we will see resurgence in the Sandler. Of course, Sandler isn’t the only person in this ensemble of a film; however he is one of the best parts in this surreal film that shows us we have lost the human connection in person. Jason Reitman delivers, I think, one of his best in years and I don’t fully understand the hate for this film. Reitman’s direction was powerful without it being overbearing. He showed us how we, as a race, have been induced with a cornucopia of technology and social media to where we can’t even have an honest human connection without a text message or seeing if they are online on a site somewhere. This film primarily focuses on the sexual nature of humans and how we have relied on social media and the Internet. What happened to the days where people walked up to someone they liked and tried talking to them? Reitman addresses this by showing us people being portrayed as teenagers to adults in this film. It isn’t happening to just teenagers, adults have to use technology for sexual pleasure as well. The beginning of the film will make you sit back and be in awe on how far we have come as a race. The acting is top-notch and everyone brings their A-game. It feels like everyone is playing real life characters and I couldn’t tell they were acting, that’s how natural it seemed. Ansol Elgort, Dean Norris, Judy Greer, Jennifer Garner among many other actors grace this film. Adam Sandler gives one of the best performances of his career in a very long time. The cinematography is good overall, nothing standout but it’s also not noticeable to where it’s bad. The opening sequence is shot well as it explains the state of humans and where we are going. The film is about two hours and this is where it faults for me. As much as I loved the film overall, I can say you could chop it down a few or make the flow a little smoother. Some parts through it felt like it was dragging, but overall the pace is good. This is a great look on humanity, technology and lost love we all have with human connection. One of Jason Reitman’s best. 8.5/10
(Review by Chase Lee)