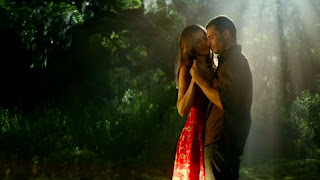 This is a romantic drama movie in which you can see the history like a flashback in the sequel on the present life to the love story of a 2 high school sweethearts. The movie started
with a few scenes of them but with a major accident on a Marine Platform where Dawson Cole was sent in the open sea. When he opens his eyes in in a Hospital room talking to a doctor who can not explain how he still a live after the explosion.

James Marsden and Michelle Monaghan play Dawson Cole and Amanda Collier, former high school sweethearts (she’s now married, and he's still single) from what we used to call “opposite sides of the tracks,”  who reunite inadvertently when a cherished mutual friend dies. They return to their small Louisiana hometown (changed from North Carolina in the book) for the first time in 20 years because Tuck, played by Gerald McRaney, has left a will with a request that involves the two of them.

In extensive flashbacks, with Luke Bracey and Liana Liberato playing younger versions of Dawson and Amanda, we learn why their romance never blossomed into a committed relationship, and why he ended up spending considerable time in jail. What drove them apart despite their obvious mutual love was her respectable family’s fear that his family’s criminal past (and, it turns out, present as well) were too objectionable and threatening.

The adapted screenplay that veteran director Michael Hoffman (Gambit, Soapdish, Restoration, One Fine Day, A Midsummer’s Night’s Dream, The Emperor’s Club, Game 6, The Last Station) co-wrote with Will Fetters and J. Mills Goodloe is based on the 2011 Sparks novel of the same title.

For most of its running time, The Best of Me is an effective tearjerker, which means it’s a weepie that isn’t creepy or sleepy. Early on, the film overcomes our resistance despite the familiarity of the approach, and we find ourselves sufficiently absorbed and appreciative of the slight edge that the otherwise sentimental material offers.

But in the final reel, the narrative goes off the rails.  Hoffman’s script backs the film into a corner that only the most blatantly synthetic coincidence can get it out of, and offers a resolution that is so contrived it will make even members of the target demographic laugh out loud.

Both Marsden (who replaced the late Paul Walker, who was originally cast) and Monaghan have done plenty of creditable work prior to this -– he in such films as X-Men, Hairspray, Superman Returns, Enchanted, and Death at a Funeral; she in, among other titles, Kiss Kiss Bang Bang, Mission: Impossible III, Gone Baby Gone, Source Code, and television’s “True Detective.”
Here they both get the chance to shine in lead roles that showcase them more fully, and the script’s limitations and failings don’t really undermine their performances, which are lived-in and natural, although it doesn’t help that the actors cast as the teenage protagonists look distractingly inappropriate as younger versions of these two main characters. But we’re so taken aback by the events in the late going that just about all the goodwill already generated is wiped away in a flash.
(Review by Diana Downing)

Email ThisBlogThis!Share to TwitterShare to FacebookShare to Pinterest
Labels: Best of Me review, Diana Downing