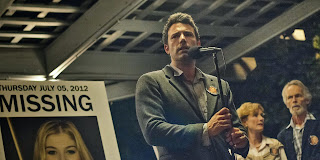 At this point, David Fincher is a master at filmmaking and “Gone Girl” shows us why he is still the master. From the beautiful cinematography, to the impeccable directing, this film has it all and has Fincher’s stamp all over it. From the opening shot, I was riveted and wanted to know more about this crumbling marriage portrayed by Ben Affleck and, standout, Rosamund Pike. Attention to detail is shown in every scene and it commands your attention. I have always compared Fincher’s movies to a dirty movie you watched as a kid when your parents told you not to. What your seeing on the screen is gritty and brutal yet you can’t look away because its made so well. This is different from any movie he has done. This takes a weird and crazy turn that I didn’t see coming, but the slow burn up to it is expertly done and handled with care. It is also noted that the film has a layer of dark comedy throughout almost seeming like a satire at some points. This film explores the media and how its handled and marriages and how not all of them seem perfect. I won’t spoil anything else as I would rather you experience it for yourself. The acting is really strong as Pike steals the show. Her character range and depth was astounding to watch. Affleck delivers, in my opinion, his best performance in years. He has a screen presence that is hard to ignore. Neil Patrick Harris and Tyler Perry were fine but anyone could have played in their roles. The cinematography was gorgeous and it was lit with perfection. Every scene was amazing to watch as you mix the fantastic performances with the breathtaking visuals. To true style of grit was added from the lighting and framing shots, which made the thriller story more compelling. The film is, roughly, two hours and twenty minutes and to some people it might seem slow and boring, but I thought it was at the right pace with intrigue and curiosity to keep you glued and engaged to the screen. I thought this was one of Fincher’s best and I implore everyone who loves film to check this out. It’s definitely in my top ten for the year. 9/10
(Review by Chase Lee)

Posted by Dallas Movie Screenings at 8:20 AM