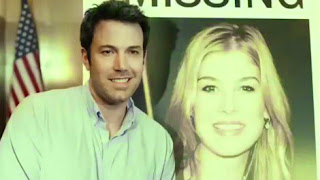 Outside of Alien3, director David Fincher has an outstanding cinematic track record. Se7en, Zodiac, The Social Network, The Girl with the Dragon Tattoo, and of course Fight Club are movies that are worth watching multiple times. Gone Girl will also be another winner with the script written by the original novel's author Gillian Flynn. Flynn a longtime Entertainment Weekly TV critic before she was laid off in 2008, collaborated with Fincher into translating some of the elements from her book to the screen, which turns out the ending may be slightly different from the book. If you have not read the book, then it's probably a good thing, because opinions on the books' ending have not been favorable.

The movie starts with suburban husband Nick Dunne (Ben Affleck) looking rather ordinary discovering his wife is missing. The story is narrated by Nick at the beginning as he works with the local police into trying to find what looks like a possible murder in his home. The other part of the story is narrated by his wife Amy (Rosamund Pike) who relays in diary entries her relationship with Nick and eventually the break down of their marriage. The movie unfolds from Nick's perspective and from his calm and somewhat bland behavior, it makes him the prime suspect. The lead detective Rhonda Boney and her assistant Officer Jim Gilpin (Partick Fugit) are differing in their suspicions of Nick. All of the clues seem to be pointing to him. Even his sister Margo (Carrie Coon) begins to unwillingly question her brother.

Nick and Amy were two magazine writers who met cute at a New York party and became inseparable afterwards. They lived the good urbanite life in the city until Nick lost his job, then Amy lost hers. Nick's mom got cancer and he wants to move back to Missouri to help her out. Amy's parents Marybeth and Rand (Lisa Banes and David Clennon) had written a series of children's book called the Amazing Amy that shadowed Amy's real life but now they are bankrupt and had to draw from Amy's trust fund. When Nick and Amy settle in Missouri they are pretty much broke. The change of big city to small Midwest town is hard for both of them, especially Amy. The imagine of the idealistic perfect couple begins to chip away as the story progresses as the detectives slowly find clues that Amy left behind.

Won't mention any spoilers here. It's best to let the story unfold and Fincher does it well and even at 2 1/2 hours you do not notice because it's so fascinating. Slowly removing the layers that each of his main characters had buried themselves. Affleck is as always very good with just the right fear and relief that his wife is missing. Pike, who we will see more often now because she owns this movie, is terrific as the wife with her secrets. But if some people didn't like the ending of the book, it's hard to say if they will like the ending of movie any better.
(Review by reesa)

Posted by Dallas Movie Screenings at 8:09 AM