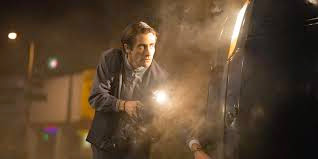 Jake Gyllenhaal could have pursued the easy route of rom-coms for good looking young actors after breaking through with Brokeback Mountain. Outside of Prince of Persia he's chosen more interesting characters like in Zodiac, Enemy, and Jarhead. Now he's gone the Christian Bale American Psycho sociopath method losing 20lbs for the role in this new film directed and written by Dan Gilroy (who wrote The Bourne Legacy). It's dark, complicated and Gyllenhaal nails the character completely.

Playing Lou Bloom, Gyllenhaal's gaunt face and slicked back hair ignores his usually pleasant features in favor of a more predatory fake smiles. He's articulate, totally self involved, and doesn't really listen to what's being said to him by manipulating the conversation to his viewpoint. He's been living stealing things for cash trying to get a job with the construction boss to whom he selling the fenced items. Really not a good idea, but Lou really sells himself. One night he comes upon an accident and sees an independent stringer (Bill Paxton) taking pictures of the scene. He asks him about the job and becomes more fascinated when he sees the footage on the morning news. He believes he's finally found his calling. Pawning a stolen bike, he gets a camcorder and a police scanner trying to find ways of capturing events. He's thrown out of most scenes, until he manages to get some upclose shots of a gruesome shot victim. He goes to a local TV station and sells his first piece. The station's news director Nina (Rene Russo) compliments him on his abilities which encourages him to bring her more pieces. Lou hires a homeless kid with no experience to be his assistant for $30 a day. Rick (Riz Ahmed) is clueless, but buys Lou's confident attitude as an employer. They are successful enough to get a better, faster car and more equipment. But soon Lou is also manipulating accident and crime scenes to get better frames.

The subculture of Nightcrawlers, the freelance stringers who hustle to sell their coverage of life's more darker mayhem to the highest bidder is a cutthroat, unregulated, underground industry. This fits Lou's temperament who is totally immune to the horror that he is capturing, seeing only an opportunity to advance his own agenda. With no formal education, Lou is like a sponge and a master at learning everything one needs to know from the Internet. At one point he took and online business course and is full of motivational speeches as a way of his own self improvement. Nina is his perfect foil as the hungry for rating graveyard shift news director who buys Lou's increasing dubiously attained shots.

At one point Rick, frustrated by Lou's machinations on creating the ultimate on the scene capture of some wanted murderers tells him what his doing is f**ked. Lou says that he may not understand people, he just doesn't like them. Whatever humanity he may have slightly exhibited in the beginning of the movie is overpowered by the tyrannical psycho he becomes when he gets a taste of success. Gyllenhaal is so totally committed to his character it's hard not to rubberneck.
(Review by reesa)