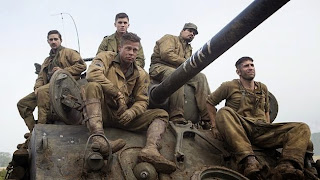 Writer/director David Ayers who also is the master of End of Watch, Sabotage and Harsh Times, takes on a World War II tank crew during the final push into Germany. It's loud, claustrophobic, filled with stock characters, but probably one of the better war movies that have come out in a long while. There are some gruesome images of the devastation done to the people, livestock and land under siege. The horror that both sides do to each other reminds us that ideals are peaceful and history if violent.

Brad Pitt plays Sergeant Don “Wardaddy” Collier who had been leading his tank crew in Africa, Belgium and France. Now they are invading Germany while refugees walk away from their burnt out homes. The crew of the M4A3E8 Sherman tank called "Fury" has just lost one of their own. The position on their team is Pvt. Norman Ellison (Logan Lerman) who was a typist before being sent to the front. Shia LaBeouf reminds us that he still is a good actor despite his craziness in his real life. He plays Boyd Swan, nicked named Bible for his ministering to the dying on the battlefield. Michael Peña is Gordo the driver, John Bernthal is the not so bright Grady the mechanic. They give the newbie a hard time, and Collier serves up some tough love on the boy who freaks out on his first encounter with the enemy.

The story is sort of predictable and the character's are stereotypical for the usual war movie. The diverse characterizations are held together by the squinty eyed Collier who watches and protects his crew even when he is in his own emotional turmoil. The realities of their missions are reinforced by the Captain (Jason Isaacs) sending the tank teams to rescue a platoon that's been pinned down. They have no intel on the situation so they have to go in blind. But with each incursion, the teams buck up and even chant good naturedly that they love this job.

Collier and the crew indoctrinate Norman to hate the enemy. Each experience brings Norman to the darker side. Because the hesitant and unsure comrade in arms will get them killed. Even when you can tell what's going to happen in the end, the battle scenes will keep one at the edge of their seats. Tanks are tough and can take a pounding, but the German tanks were more superior with better armament. The fight between Fury and the German tank reminds us that war is hell, but can't feel somewhat a little patriotic.
(Review by reesa)