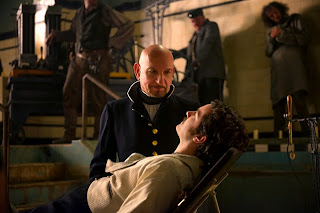 If you say Edgar Allan Poe, I am generally all over it. Prolific tales of mystery and imagination describes the literary output of the author who wrote the short story that Stonehearst Asylum is based upon. At nearly two hours, large portions of this movie feel just like awkward filler in this adaptation. The cast all have stellar reputations and include Ben Kingsley, Kate Beckinsale, Jim Sturgess and Sir Michael Caine. Sturgess plays a newly minted Oxford Dr., Edward, who arrives at the estate late one night, to the surprise of the groundskeeper, to observe and study the methods of the staff in working with the institutionally insane upper crust residents there. The story takes place at the turn of the century in Victorian England and general moodiness is the order of the day in setting and feel. . Kingsley portrays the head Dr. or so we are led to believe initially, as he channels his character from House of Sand and Fog in a cartoonish kind of way, to portray the superintendent. The Dr. is given the tour of the ginormous place and meets many of the eccentric residents who are full of demons, quirks and alternate identities. It is pretty easy to figure out that things are not really what they seem in this lively place. Beckinsale plays the beautiful Eliza,, who really seems to be quite sane whenever she appears despite a diagnosis of hysteria. Edward quickly falls for her quiet charms as the situation at the Asylum begins to unravel. The Dr. discovers that the methods employed at the asylum are quite innovative, kind and unusually humane as the residents are integrated into normal situations, such a formal dinners and parties, and seem to have the general run of the facility. The beautiful young nurse is one of the first clues that the asylum has had a change in original management. As the good Dr. explores the sights and sounds that go bump in the night, he falls deeper in love with Eliza and discovers the big secret in the basement. Michael Caine appears about halfway occupying a one dimensional role in which he is generally wasted. David Thewlis appears as the aptly named Mickey Finn, who is groundskeeper and gopher/lackey for Kingsley. He moves about the the eyes and ears of the super, always the threat in the background.

It is hard to figure out, sometimes, if the director and writer are going for a comedy/drama or a period piece. The chuckles appear in the most unusual places and feel a bit odd. There are a couple of twists that make the film interesting but it really just isn't enough with the script and limited characterizations. that were given to the talented actors to develop. There just isn't that much in the bones of the film to completely redeem it. Director Brad Anderson, who brought us the masterpiece known as "The Machinist" really missed the mark in this one, based on his reputation. The film feels empty in parts, like it is killing some time. The viewers are exposed to the inhumane methods that were utilized in real life asylums, as through flashback we see the events that preceded Edward's arrival. There will be one generally question that the movie goer will be asking themselves over and over once the big secret is revealed. Why doesn't the Dr just............... well you will figure that one out. Poe fans will probably be disappointed and if this were not being released in October, the "have to see a scary movie" crowd would probably not be checking it out. But if you want to see what it is like when the insane are running the asylum, feel free to check this one out. There are more twists and turns in this Asylum than originally meets the eye. Our audience was quite gracious and many applauded at the end, but it was more in response to the conclusion itself, as opposed to the entire movie watching experience.
(Review by Cheryl Wurtz)