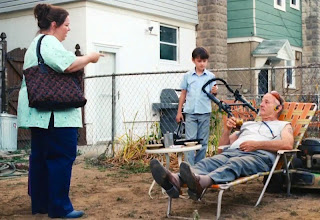 This film looks like an ever so slightly uneven balance. The lighter side is being the comedy and the heavier being the drama. A man who is in debt, unemployed, and tired of reality meets a very mature young boy that eventually brings him back to the surface. The director and writer of this film, Ted Melfi, is what I would call unexplainably brilliant. One of the first lines you here from Murray’s dishevelled character goes something like “Dead is as old as you get” in response to a question of 50’s TV actors.

The whole cast was just beautiful in their human and dirty type of way. The mother of the young boy, played by the returned Melissa McCarthy, is struggling to just keep a healthy lifestyle while providing alone for her son. I mean returned from “Tammy”. Her later appearing husband had cheated on her with three women she personally knew. McCarthy brought a level of motherhood that I always knew she had even as a quirk from “Bridesmaids”. Naomi Watts was just plainly bewildering with her accent and had a shockingly realistic stripper/prostitute attitude towards Vincent. Bill Murray just pushed the tears in people eyes with a cigarette and conjured up laughs with an “I DON’T CARE ABOUT THIS SH@%” calm attitude.

The stories are all separate but become intertwined through pain and love from and for each of the characters. Vincent’s wife has Alzheimer’s and is in a home that Vincent can no way afford but wants to give to her. There are bookies involved and long work hours with little time for kids in the characters’ lives. I was in the last third of the film thinking man this is really a crappy situation for everyone but somehow there is still blunt comedy produced out of the script. Terrence Howard performed the small role as a nice but not nice bookie. He seems a little mean by just speaking but I’m sure in real life of course he’s a cool dude.

Finally, I have to say that this kid was a smart and mature goldmine probably literally given life 10 years ago. He really convinced me as well as a lot of other people that he could bring Vincent back to kindness and inner happiness. Mr. Melfi, I have to say that every single penny in a theater that this plays in is under payment for the senses and souls that you reach with this fictional yet non-fictional movie. Nobody has done something this witty and vulnerable as a comedy that I’ve seen at least.
(Review by Wyatt Head)