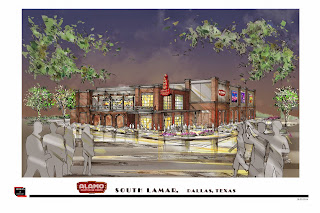 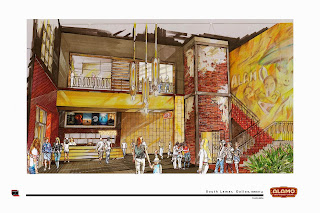 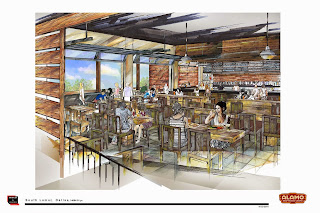 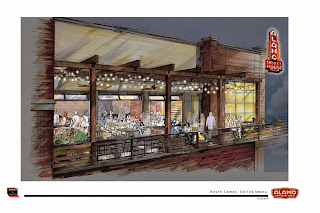 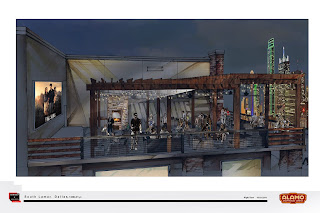 Dallas - Oct 30, 2014 — In July, Alamo Drafthouse Cinema DFW, announced Dallas is getting its very own eight-screen theater on the southwest corner of Cadiz Street and S. Lamar Street, between the Dallas Convention Center and the South Side on Lamar. In addition to in-theater dining, Alamo Dallas will feature a second level Taproom with two patios and a panoramic view of downtown. The Taproom and patios will have seating for over 200 people and feature an extensive menu of 32 craft beers on tap; over 35 bottled beers, wine, craft cocktails and scratch made food. The bar and front patio will have overhead garage doors linking the two spaces and allowing for great views of downtown Dallas. The back patio will feature an outdoor movie screen complete with 4k projector, stage for live music, and private karaoke rooms. As with any bar in an Alamo Drafthouse, guests are invited to enjoy lunch, dinner, brunch, and happy hour whether seeing a movie or not.

“As you may know, Alamo is more than just a great theater, it is a cultural hub for all kinds of entertainment; movies, music, comedy, drinks, dining, and, of course, Alamo’s world famous events. Our second-floor bar at Alamo Dallas will be second to none and serve as a stand alone watering hole or simply a place to relax before or after a film,” said Bill DiGaetano, owner/COO, Alamo Drafthouse Cinemas DFW.


Alamo Dallas Details
Alamo Drafthouse Dallas will be a state-of-the-art theater with 8-screens and just under 1,000 seats. Each auditorium will be equipped with the latest in 4K digital projection with larger-than-average screen size to room ratios and 7.1 Dolby Surround Sound. Select auditoriums will also feature 35mm projectors for Cinephiles to experience classic and repertory content as they were meant to be viewed. Not only will they feature superior audio-visual equipment, additionally the format of each theater will eliminate the traditional front row, ensuring every seat in the theater allows for an optimal viewing experience.

What Sets Alamo Drafthouses Apart
Alamo Drafthouse combines dinner, drinks, films and events, all under one roof. The theaters have been heralded for their unique programming events and high exhibition standards, earning accolades like “Best Theater Ever” (Time Magazine) and “the coolest theater in the world” (Wired).

Alamo Drafthouse provides a unique combination of theater and restaurant, showing first-run movies, independent films and special programming events with an extensive menu made from scratch in a state-of-the-art culinary kitchen. Customers order food and drinks from servers who quietly attend to them throughout the movie.

Customers are encouraged to arrive early to enjoy the pre-show entertainment. Instead of a barrage of advertising, the Alamo shows a curated collection of rare and humorous clips. “We're proud of the fact that we don't show any advertising,” Tim League said. “People don't want to pay for a movie and then be bombarded with 20 minutes or more of shampoo commercials. If you don’t like the movie, we strive to produce a pre-show good enough to still make for a great experience.”

Alamo Drafthouse protects the theater experience with a zero-tolerance policy for people who disrupt the film with talking or texting. Alamo Drafthouse was featured on global news for a viral “Don’t Talk” PSA that used a humorously misguided voicemail from an actual patron who was ejected for using her phone during the film. The full story on the long tradition of Alamo’s no talking/texting policy can be found here: http://cf.drafthouse.com/she_texted_we_kicked_her_out2.html


Dallas – October 23, 2014—Alamo Drafthouse Cinema is please to invite you to the first celebration for the new Dallas location and a free outdoor screening of the John Hughes classic, FERRIS BUELLER’S DAY OFF. The event will take place on November 8 in the parking lot adjacent to Cedars Social, 1326 S. Lamar Street, Dallas, Texas; just down from the future home of Alamo Drafthouse Dallas. Gates open at 5:00 pm and the film rolls directly following the informal, non-ceremonial groundbreaking at sundown. (Really, it’s just an excuse to through a party and invite 1,000s of our closest fans!) Food Trucks will be on site, as will local beers from Dallas’ own Deep Ellum Brewing Company. Select wines will also be available. This event is BYOC (Bring Your Own Chair) and is friendly for both two-legged and four-legged kiddos.

“We’re very excited to host this construction-kick-off party on Lamar Street. It’s a great chance for us to meet our new neighbors and for our fans to get familiar with the location of Alamo Dallas all while having a great time. These Rolling Roadshows always turn into a fantastic block party with a few thousand people, pets, families, great food trucks, local beer, and, of course, film. We can’t wait to be open in Dallas and our fans should expect more outdoor movie events this spring before we open,” said Bill DiGaetano COO/Owner Alamo Drafthouse Cinema DFW.

Email ThisBlogThis!Share to TwitterShare to FacebookShare to Pinterest
Labels: A bar that just isn't a bar., Alamo Drafthouse Lamar Renderings