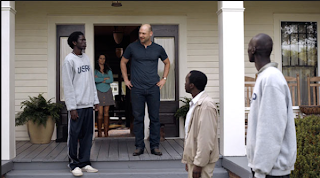 Many of us have read about "The Lost Boys." Many of these young men came to the DFW area, sponsored by humanitarian and church groups for relocation and to rebuilt shattered lives. These Sudanese boys, girls, young women and men were orphaned by a horrific civil war in Sudan around 1983. They faced being kidnapped to be trained as child soldiers, physically harmed and violated and often times killed. To save themselves, many of these young people fled for their lives, sometimes joining up with other groups in a large mass exodus. They would travel hundreds, sometimes a thousand miles with few to no supplies and often barefoot, in search of shelter, safety and basic human need fulfillment. Refugee camps were set up in safe areas but many of the fleeing citizens became stuck there, with most having to stay as long as 20 years. A decade and a half after the war, many social and humanitarian groups would then bring 3500 of these lost boys and girls to the United States to start over. This is a saga meant for the big screen, to tell the many tales of those who overcame adversity and set back only to find themselves fortunate enough to be given a chance to build a new life.

In the film "The Good Lie," writer/director Philippe Falardeau brings to the screen the inspired story of four friends, 3 boys and 1 girl, who have become their own new family through helping each other survive and persevere. It is a story of overcoming the odds, strength of will and patience to a desired end. Arnold Oceng (Mamere), Ger Duany (Jeremiah), Emmanuel Jal (Paul), join newcomer Nyakuoth Weil (Abital) star as the refugees. The first three play the boys and are Sudanese actors who were actual “lost boys” and child soldiers in the war. They and their performances shine, alongside Reese Witherspoon (Carrie) and Corey Stoll (Jack- her boss) who play two of their relocation helpers for gaining employment in the Midwest. The young men are separated from their sister, who is kept in Boston with another host family, as one could not be found for her in Kansas City. The separation is hard on all of them and difficult to watch. Filmed in Georgia and South Africa, the contrast between the two civilizations and lifestyles is wide. We come to an awareness of the difficulties and hardships one might have in adjusting to a brand new and strange culture, through various adventures the men have. We are reminded that no matter where we come from or what we have experienced, home will always call to us, even if we don’t know what a telephone is or how to answer it.

The film has several bright moments, including when Carrie first tells the boys about what “a good lie” is; One that hurts no one but can help someone. A good lie helps them into employment and a good lie will change the lives of two of them forever. Having a friend in relocation services in the Midwest, I learned that while this story is inspiring and heart-warming, it is a rare story for the lucky few who win a lottery for support and sponsorship. The tenure in these camps is extremely long and so few actually make it out of them. They still exist today and one can tell there is hope that this film will promote an awareness of the plight of current camp residents. The characters and situations seem real and palpable. What comes out of the film is what we all hope to perpetuate in this world; Goodness, kindness, humanity and love for your fellow man. Some may fine it predictable and sappy, I found it heart-warming, inspirational and full of hope.
(Review by Cheryl Wurtz)

Posted by Dallas Movie Screenings at 8:19 AM