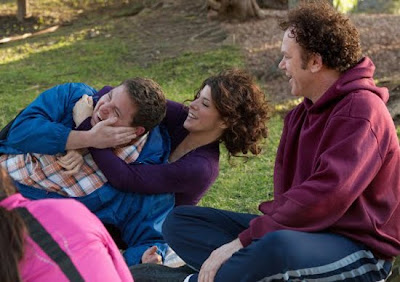 John’s ex wife comes over because he’s not answering his phone and walks in at the most inopportune time. She came over with news that she’s going to marry her current boyfriend and invites him to get out and meet new women. She and John have been divorced for several years, but John is still not over it. He goes to the party and attempts to start conversations with women get him immediately shot down. After several drinks he confesses his heart to the most unattractive woman and even she fakes a feigned phone call to walk away from him. He meets Molly in the backyard while he’s using a bush as a bathroom. They hit it off right away. John couldn’t be happier until he meets her son Cyrus.

John (John C. Reily) doesn’t understand why beautiful Molly (Marisa Tomei) is mysterious about her living situation. After the 2nd night of her taking out, he decides to follow her. He falls asleep and wakens to find him self still in his car. He snoops around until he’s confronted with Cyrus (Jonah Hill). Cyrus invites him in while they uncomfortable small talk and Cyrus plays his electronic synth music compositions. Molly comes dancing in the house surprised to find John. Cyrus asks John to have dinner. John begins to notice the more than quirky relationship between son and mother. Molly was a single mom who home schooled her child. They are more like good friends with their own routine and company. Cyrus acts all sweetness and light with John in front of his mother, but even John suspects that Cyrus is trying to sabotage his mom’s new relationship. John still confides and confesses all to his ex wife Jamie (Catherine Keener) much to the consternation of her fiancé.

Written and directed by the brother team of Jake and Mark Duplass who filmed it like a documentary and having no rehearsal for their cast. The characters interact with each other pretty much like real life. There’s lots of hem’s and haws, awkward silences, and its just as boring as real life. The movie is being marketed as a comedy, but it’s really more like a dramady. John C. Reilly plays the same sad sack person that he’s done before. Keener is wasted as the exasperated first wife who has to listen to John talk forever about his angst with Molly. Jonah Hill who’s known mostly for his comedy films, plays this more seriously. Marisa Tomei has the more complicated person to decipher as Molly is a loving mom, who wants to create a new one with John and not seeing how her son is manipulating her. There are some amusing moments, but the story crawls with highly dysfunctional characters.
(Review by Reesa)

Posted by Dallas Movie Screenings at 1:08 AM