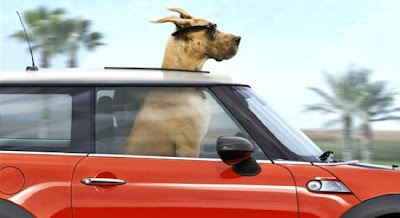 The Winslow family is moving from Kansas to Orange County, California along with their oversized Great Dane Marmaduke and his step-bro, a Russian Blue cat named Carlos. Together they help the family make the transition to their new home.

Marmaduke (Owen Wilson) is a 200 lb beast that is over 6ft tall on his hind legs. He’s also the equivalent in mindset and energy to an over grown teenager, not very coordinated or sure of himself. When Phil Winslow (Lee Pace) takes him to the local dog park, Marmaduke is like the new kid high school. He has to maneuver with the local “cliques” of dogs already there. There’s the pedigree’s, the mutts, the jocks, the drama queens, stoners and the juvenile delinquents. Maramduke already feels out of place being so over sized and manages to get a lot of unwanted attention. He decides to try and get in good with the pedigrees with the help of Carlos (George Lopez) who would rather have nothing to do with the whole pet park scene. But the big dog is his bro and best friend. Mazie (Emma Stone) one of them mutts is not too happy that after helping him get in the pedigrees he begins to get too full of himself. Especially when trying to impress Jezebel (Stacy Ferguson). Her boyfriend Bosco (Kiefer Sutherland) is the alpha dog and makes it clear that Marmaduke should keep his paws off of her. The Winslows go out of town for a few days and Maramduke invites the pedigree’s over for a party which turns into a disaster when the purebreds destroy the house and furnishings.

Phil Winslow has become a marketing chief for an organic based pet food company. His boss is the eccentric dog loving Tom Twombly (William H. Macy). Twombly holds his meetings at the dog park where his staff has to go barefoot because dogs don’t wear shoes. This is disconcerting for Phil who must maneuver around the land mines of dog muffins. Judy Greer plays Phil’s wife Debbie who keeps their family of Phil, their 3 kids and their 4th huge kids happy. But Phil’s job demands is making him lose sight that his family is trying to communicate their unhappiness. After Marmaduke’s party, Phil makes the dog stay out in the rain. Marmaduke already feeling bad about losing respect from the other dogs decides to run away.

Marmaduke is a newspaper comic strip by Brad Anderson that was started in 1954 to the present day. Unfortunately not many people read the comics these days. So this movie directed by Tom Dey has to rely on kids wanting to see a talking dog movie. Animal lovers, especially those of us who humanize our pets will enjoy the interactions of Marmaduke, his furry friends, and his relationship with his owners as his family. The only thing that is a bit annoying is the dancing dogs. Reminds me of the unfortunate dancing sequence at the end of Alice in Wonderland.
(Review by Reesa)

Posted by Dallas Movie Screenings at 1:49 AM