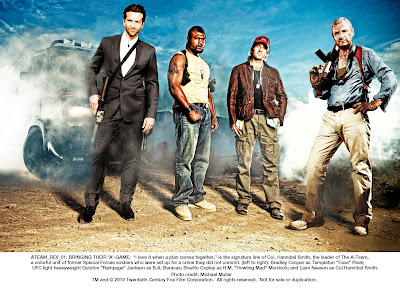 In Mexico a couple of cops are torturing an unknown man for information. When they realize they are not going to get what they want from him, they attempt to kill him with his own gun, but it lacks a firing pin. They are in a hurry to meet up with the rest of their crooked outfit and decide to leave him to the dogs. The man turns out to be Col. John “Hannibal” Smith, and he’s got a few tricks up his sleeve that opens his handcuffs, placates the dogs, puts the pins back in his gun, and smiles with satisfaction as there is a tracker in the wad of cash the bad cops are taking to their boss.

For anyone not familiar with the TV Show that aired in 1983-1987 with George Peppard, Dirk Benedick, Dwight Schultz, and Mr. T, the film opens re-introducing the characters. Hannibal (Liam Neeson) is the mastermind and he is working with wise cracking womanizer Lieutenant Faceman Peck (Bradley Cooper). On the way to the rendezvous with Peck, he hijacks a van driven by BA Baracus (Quinton “Rampage” Jackson), who just got back his beloved vehicle from the illegal garage where he had previously worked. Smith realized that he’s a former Ranger and he’s recruited for the job. They save Peck, but in order to complete the mission they need a pilot which leads them to break out a questionably sane patient, Capt. HM Murdock (Sharlto Copley) from the hospital.

Eight years later, the team is in Iraq running very successful missions for their commander General Morrison (Gerald McRaney). They have the reputation of being able to get the job done, although not quite by the book. They are often butting heads with the black op mercenaries lead by Pike (Brian Bloom) whose animosity knows no bounds. CIA agent Col Lynch (Patrick Wilson) comes to Smith and Morrison with a job to reacquire printer’s plates that are used to print American currency. The mission must be completed completely off the books. It becomes complicated when Capt. Carissa Sosa (Jessica Biel) and former girlfriend of Peck, comes to tell them to stay away from the plates. Of course they don’t follow her advice. The team ends up being accused of running an illegal op, and Sosa thinks they are in co-hoots with Pike to steal the plates. The team pulls out all the stops to discover who is framing them, to clear their names, and reinstate their ranks when they are convicted and sent to separate jails.

Directed by Joe Carnahan who also did the manic Smoking Aces movies, wrote the movie with Brian Bloom and Skip Woods. It offers plenty of improbably action sequences that are fun to watch, and don’t tax the brain. The TV show was typical of action shows back in the 80’s with bad acting, cheap production values, but it made it up in the chemistry of the characters. Neeson doesn’t have to playfulness of Peppard as he’s more intense and the rest of the crew honors the original with more pizzazz. Bloom, who once was a pretty boy from the soaps, makes an effective bad guy, where as Biel is a pretty distraction.

You can catch episodes of the TV show on Hulu.com, but this movie can stand on it’s own if you are not familiar with the concept. There’s tons of explosions and major destruction which may be overkill. But chances are you may leave the theater saying, “That wasn’t too bad”.
(Review by Reesa)