Joan Rivers: A Piece of Work 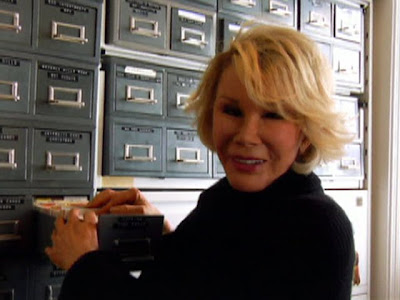 Whenever someone mentions Joan Rivers it is usually followed by a groan. The most immediate image in one’s mind is an over made up older woman who has indulged in one too many plastic surgeries selling jewelry on QVC. Documentary filmmakers Ricki Stern and Anne Sundberg (The Devil Came on Horseback, The Trials of Darryl Hunt) followed Ms. Rivers for 14 months starting with her 75th birthday to examine the life of the iconic woman of comedy.

Most people forget that Joan Rivers started out in the early 60’s at various comedy clubs in New York before her first guest appearance on The Tonight Show which was then hosted by Jack Paar. She appeared on Ed Sullivan, the Carol Burnett Show and released a couple comedy albums. Rivers had what would have been considered a cutting edge humor. At a time when woman’s liberation was on the fore front, Rivers spoke about issues to which the female audience could relate. Her famous tag line “Can we talk?” is a federal trademark. In the 80’s she became a regular guest host for Johnny’s Carson’s tonight show with Carson as her mentor. When she was offered her own TV show on another channel, Carson stopped speaking to her.

Rivers allowed the filmmakers complete access to her daily life. In her mid 70’s her main goal each day is to fill her daily calendar with appearances, interviews, selling her merchandise, movies, and TV. Her elaborately decorated home in NY speaks to the kind of lifestyle she wants to maintain, which means the need to keep working as much and as often as she can, even if it means filming a Depends (adult diaper) commercial. Rivers is a successful business woman who has her own fashion accessory line that she hawks on QVC television. She even won the Celebrity Apprentice. She does stand up comedy all over the country playing at casinos, resorts, clubs, and wherever she can. Appreciative audiences in the small towns are subjected to her raunchy acute humor and Joan is very generous with her fans afterwards.

This documentary offers an unexpected glimpse into the life a woman that not only broke ground for other comedienne’s like Kathy Griffin, but as a mom, grandmother, hard working businesswoman, and entertainer for the past 50 years, and with probably more to come.
(Review by Reesa)

Posted by Dallas Movie Screenings at 8:54 AM