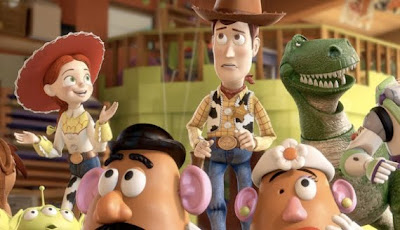 Woody, Buzz Lightyear and all the toys in Andy’s toy chest are trying to find a way to get Andy to play with them again. The plan comes to naught as Andy, now 18 years old and soon to be heading off to college doesn’t have the interest. The toys realize their fate must be the attic, the trash or becoming separated by being sold at a yard sale.

The toys vow to stick together no matter what. When Andy’s mother (Laurie Metcalf) finally convinces him to separate his belongings for college, attic or trash, Andy (John Morris) recalls the fun that his toys had given him over the years, and decides to take Woody (Tom Hanks) with him to college and the rest would go to the attic. Unfortunately the toy bag is mistaken for trash and is put out to the curb. Buzz (Tim Allen), Jessie (Joan Cuasak) and the rest are still traumatized to believe Woody when he tells them they were destined for the attic. Instead they decide to take control of their own lives have themselves donated to the local daycare center. At first they believe they have found the perfect place to once more be useful and make kids happy. The resident toys all seem to welcome them with open arms. The leader of the daycare center toys is Lots of Huggin Bear or Lotso (Ned Beatty). His second in command is Ken (Michael Keaton) who falls for Barbie (Jodi Benson). They lead the toys to the caterpillar room. Woody suspects something amiss when he sees the toys in this room cowering. His friends want to stay still believing they are better off here. Woody has to get back to leave with Andy but he only manages to get as far as the tree outside when a little girl discovers him and takes him home where he meets her other well loved toys. They help him find a way to get home to Andy until he hears that all may not be as it seems at Sunnyvale Day Care. Seems all new toys are sent to the room for the rowdy little ones that don’t really play with toys as much as abuse them. When Andy’s toys try to talk to Lotso about it, they realize they are trapped. Woody has to find a way of saving his friends and getting them back to their home before Andy leaves.

Pixar once more adds another quality story to the end of the trilogy which started in 1995. The second part of the toys’ adventure was in 1999. Last year the first two movies were released in 3D and this one is opening with a digital 3D print. Before you start to groan over the over abundance of films in this medium, put your trepidations to rest. This one actually works nicely and enhances the quality of the film. Directed by Lee Unkrich who also did Finding Nemo, Monsters, Inc. and Toy Story 2 and it was written by the successful team of Michael Arndt, John Lasseter, Andrew Staton and Lee Unkrich. Anyone who has grownup with his series will feel a tear in the eyes at saying goodbye to those characters that were loved and part of our lives. The film is one that parents will enjoy as much as their children. And maybe you will thinks of those toys that gave you such pleasure as a child. I still have my Barbie from 1959.
(Review by Reesa)