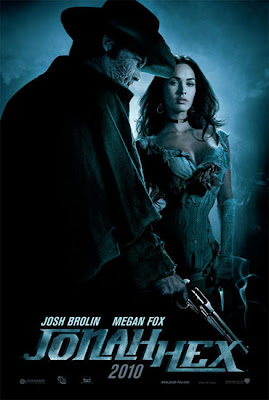 It’s the Civil War and Jonah Hex finds that it’s the one thing he’s good at. He’s fighting for the South, but one day his commander gives and order he cannot follow. He ends up killing his best friend who happens to be the commander’s son. His commander exacts revenge by having Jonah’s family burned in a house fire in front of him, then had his face branded. Left for dead, he survives after 12 days when an Indian tribe finds him and heals him. Jonah believes being that close to death had given the ability to understand the crows and to speak to the dead.

Jonah (Josh Brolin) survives from sheer will to exact revenge on Quentin Turnbull (John Malcovich). When he finds out that he was killed, Hex turns to bounty hunting for a profit. The thing is, he’s more likely to bring those back dead than alive. The bounty ends up higher on Hex then to pay out for the bad guy bodies that Hex turns in. This does not end well as Hex is ready to survive the confrontation with superior fire power. (Gatling guns attached to the sides of a horse).

The President (Aidan Quinn) gets word that a train was hijacked and the munitions and cannons aboard were stolen and the innocent passengers were killed. The military have “intelligence” that Turnball is alive and that he maybe trying to create a weapon that that the government had once commissioned but stopped because it will create “hell on earth”. The President suggests that they hire Hex to find Turnbull and stop the bomb

The Jonah Hex character has been around since the seventies appearing the comic series called Weird Western Tales. Later in the eighties he was a bounty hunter fighting zombies. A combination of Clint Eastwood and John Wayne in alternative universe, Jonah Hex doesn’t have super powers, just the ability to talk to the dead. He gets shot plenty of times. Animator Jimmy Hayward directed Hex and Horton Hears a Hoo. Writers Mark Neveldine and Brian Taylor who both wrote Gamer, keeps the dialogue to a minimum and the action pumped up.

Brolin is very comfortable in role of the lone avenger with a sense of right and wrong. Malcovich as the terrorist Turnbull is not given any back story of why he wants to destroy the world as we know it. Megan Fox is a barely dressed plot device that Turnbull can use to lure in Hex. The characters are the typical stereotypes, but the production moves along quickly so you won’t worry about details…like why is Turnbull an anarchist in the first place. Fans of this genre will enjoy fighting sequences and explosions.
(Review by Reesa)