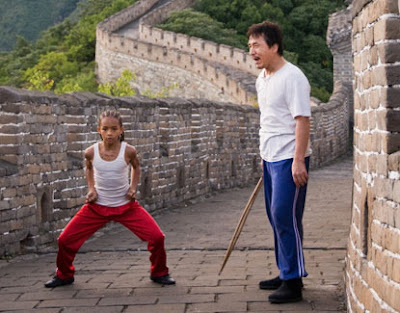 * There was no Karate harmed or even attempted during the making of this film. But plenty of high-kicks and cool moves…

The track record for films remaking / re-imaging / re-imagining / re-animating the dead, or whatever marketing people want to call it this week, is very poor. It is always sad to see a popular story with iconic characters which has genuine nostalgia and relevance across generations paved over by a train wreck of thoughtless, uncreative indulgence. Thankfully, in the ‘Smith family affair’ called The Karate Kid, this didn’t quite happen. A lot of filmmaking did happen, some quality acting (and some uneven), and Kung Fu action also happened. But there are also problems with Director Harald Zwart’s (Agent Cody Banks, One Night at McCool's, Pink Panther 2) re-telling / re-imaging / re-hash of The Karate Kid.

The film tries to be many things – too many, which probably prevents it from excelling in any one area. With being a re-make of such a well-known classic surely to draw scrutiny, its like fighting with one hand tied. You have the classic “coming-of-age” story and the “heroic-overcoming-a-great-challenge” story, mixed with a “learning-to-pick-yourself-up” story, added to the “forgetting-the-awful-past-by-helping-someone-through-a-struggle-and-then-finding-the-strength-to-move-on-with-your-life” story all wrapped up nicely in an “East-meets-West”, aka “fish-out-of-water” story that is supposed to be a heartfelt family “message” movie.

The now classic Pas de deux of karate mentor and kid-on-a-mission are played wonderfully by Jackie Chan as a humble Chinese Kung Fu master (and has some great fight action, although brief), now turned maintenance man and the up & coming Jaden Smith (originally “produced” by great stars Will & Jada Pinket Smith). There is genuine on-screen chemistry between the 12-year-old ‘Dre Parker’ who is uprooted from living in Detroit with his widowed mom (Taraji P. Henson) to go live in China to work for an unspecified time at an unspecified auto plant. Moving to China is the major change from the original which serves as a springboard for fresh story elements with the charming young lady classmate and violin virtuoso Mei Ying, played delightfully by Han Wen Wen, whose star is surely to rise as she is capable of stealing scenes as well as your heart. And Jaden is definitely a chip off the ol’ block who definitely pulls off the spunky street-smart “tween” filled with pride and genuine screen presence with style.

But the fresh departure from the East coast vs. West coast of the original 1984 classic to going on-location in Beijing also provided the opportunity for the worst indulgence of the film – so much at times you wondered are they showing commercials during movies now? Is the Chinese Tourism Board footage the world’s biggest product placement? Honestly, one more shot of the much touted Beijing Olympic Stadium and I might take a chop at the film. And speaking of editing…Coming in at a ridiculous 2 hours 20 minutes, the film slowed down at times worse than the Beijing traffic! Nonetheless, the cinematography was stunning and major highlights of the film were the sojourn to the great Kung Fu temple in the clouds to meet the fascinating ‘cobra woman’ and the Kung Fu montage of form and training on the picturesque rooftop (one more flyby, please!), and along the Great Wall. (Make your reservations today!).

As a family film, it’s way too long. At my screening, kids got bored and wandered the aisles after about an hour until the action picked up at the end. And as a remake of a classic, it’s NOT a train wreck, but it is a long, slow, and extremely scenic train ride. And it is a journey we have taken before, so we know we’re going to the music-filled training montages. So why are we seeing the Beijing Olympic stadium again? And we know we’re going to the tournament to take on the bully. So why are we seeing the Great Wall and Forbidden City at sunset again? And we know we are going to see the fruits of the Karat—er, Kung Fu Kid’s efforts in growth and transformation which enriches and lifts the spirit of his sensei. So why are we seeing groups of people doing tai chi in the park again and again?
(Review By Harlan Johnson)

Posted by Dallas Movie Screenings at 1:36 AM