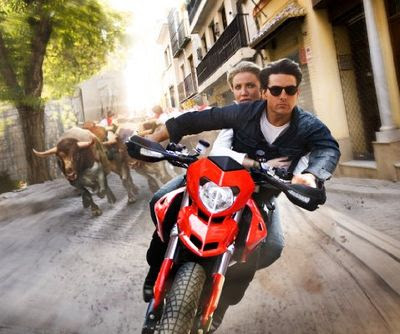 A man is nonchalantly checking out the people at the airport in Wichita. For some reason he’s paying particular attention to a type of woman. Single and traveling alone. A somewhat clumsy woman comes in pulling a very heavy suitcase, the man “bumps” into her. She goes through security with car parts. The man bumps into her again. When she is told there are no seats on her flight, the man cryptically tells her that “sometimes things happen for a reason”. At the last minute the stewardess comes out and says there was a seat for her. She enters the plane and it’s practically empty. She strikes up a flirtatious conversation with the man who bumped into her. She excuses herself to use the restroom while she contemplates whether she should indulge in the flirting, the man is busy fighting the remaining passengers on the plane who all happen to be assassins, including the pilots and the stewardess. When the woman comes out and sees the carnage she’s confused by the man’s kind of matter of fact way about him while he’s trying to keep her calm.

Thus begins the newest adventure comedy with Tom Cruise as CIA agent Roy Miller and Cameron Diaz as car restorer on her way to her sister’s wedding, June Havens. Miller is accused by his partner of going rogue and stealing a super battery. Miller has what they are seeking, but he thinks his partner (Peter Sarsgaard) is the culprit. As much as he is trying to protect June from becoming involved, she gets into more hot water and he must come to her rescue in completely improbable situations as Roy whisks her off to exotic location and doing it after she’s been drugged to unconsciousness. There are numerous car chases with one in the middle of a bull stampede. Roy also shoots her firefighter ex-boyfriend, and then tells him it’s all good. They end up in Boston, the Alps, Austria, Spain, the Azores and June finds this out each time after waking up. Paul Dano plays a mentally unstable scientist that Miller was in charge of protecting. Viola Davis is CIA director George who wants Miller stopped.

James Mangold who directed more superior 3:10 to Yuma focus’s on the star power of Diaz and Cruise but it can’t quite save the script by writer Patrick O’Neill. The plot holes are big enough to drive a truck through. Cruise who has been trying to recreate his career with his comic character success in Tropic of Thunder, fortunately doesn’t go over the top with the excessively polite and calm Agent Miller. Cameron knows how to work the daffy comic vixen that is both competent and ditzy. But both stars are getting to that point where they are just a little too old for the meet cute action/adventure roles. As long as you check your brain at the door enjoy it for the light-hearted summer movie that it is and you should have a good time.
(Reviewed by Reesa)

Email ThisBlogThis!Share to TwitterShare to FacebookShare to Pinterest
Labels: Knight and Day