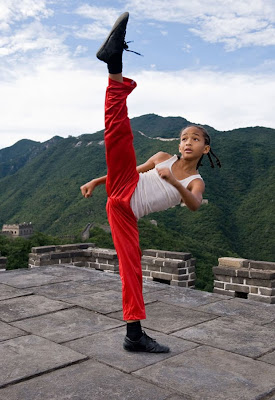 Dre Parker is a popular kid in this Detroit neighborhood when his mother’s job relocates them to China. Not only does he have to contend with major culture shock, there’s the typical gangs of bullies to avoid when he finds a pretty classmate that he wants to befriend. Dre’s American fast talking charm doesn’t seem to work at keeping him out of the way of trouble.

Dre’s mom, Sherry (Taraji P. Henson) has enough on her mind with her new job, but she also wants her son to feel comfortable with the transition. She walks with him to the school them embarrasses him with her goodbyes. Dre (Jaden Smith) has already met another American student, and apparently it’s a culturally mixed school. He eyes a pretty young lady Meiying (Wenwen Han), a serious music student, who finds Dre amusing. But Dre’s attentions to her are also noticed by a group of larger boys who insist that Dre leave her alone. Dre is more comfortable trying to talk himself out of a fight, but will not back down by standing his ground. The boys are bigger and obviously more skilled, but Dre keeps getting back up. He ends up with a shiner which he tries to hide from his mother to no avail. His mom wants to fix this for him, but Dre insists he has a handle on it. So he basically works his way around just avoiding the boys and trying to learn some martial arts moves on TV. The maintenance man for their building came over to fix the plumbing sees Dre’s shiner and his practice. He doesn’t say anything, but one afternoon after the boys chase Dre and corner him in a fight Mr. Han (Jackie Chan) comes to the rescue. Mr. Han takes Dre to the Kung Fu school where the boys practice, but the instructor won’t keep the boys from engaging in their harassment. Mr. Han offers that if Dre beats the boys at the upcoming tournament, then they will have to stop. Dre is excited to learn Kung Fu, but his early lessons consists of him taking off his jacket, putting it on a hook, taking it off the hook, dropping it on the floor, then putting the jacket on again; over and over again. There is no catch phrase of “wax on, wax off” here. Dre doesn’t realize how this simple exercise is the start of muscle memory for what’s to come.

Jaden and Jackie do pretty well with their cut out characters. Jackie adds a little depth with his sorrowful past. You forget they are in a different country because everyone seems to speak English. Jaden Smith is much smaller in stature and younger in age than Ralph Marcchio in the original Karate Kid. The basic elements remain the same. New boy in school meets girl, gets bullied by local members of a karate school, and he learns to fight them from the wise guidance of an Asian neighbor. Director Harald Zwart worked with a screenplay by Christopher Murphey from a story by Robert Mark Kamen trading martial arts and Japan for China. Jaden is so little; you wonder how he could possibly fight larger and more disciplined fighters. But it’s an interesting process to watch the physicality of Jaden’s progress. The fight sequences are well done considering these are kids involved. The ending battle like the first movie will make you cheer even if you know what’s going to happen.
(Review by Reesa)

Posted by Dallas Movie Screenings at 2:16 AM