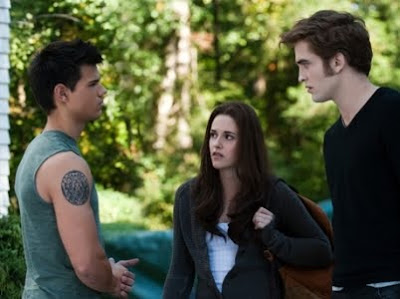 A young man walking the deserted streets of Seattle is pursued and attacked by a mysterious culprit. When he’s bitten on the hand he writhes on the ground in total agony. Seattle is under siege of what local officials is calling a possible serial killer. The city is also being plagued by a rash of missing people reports.

Meanwhile in a beautiful meadow in Forks, Washington, Edward is asking Bella to marry him. Having come from divorced parents, she does not have much faith in the institution. Edward promises that he will “turn” Bella into a vampire like him but only is she says yes to his proposal. He wants her to think very carefully about this decision to become part of his undead family and the consequences of not seeing her family any more. Her father doesn’t have any idea of the true nature of Bella’s boyfriend. He only knows that he spells trouble in her life. He encourages her to call her old friend Jacob who has not talked to her in a few weeks. Jacob’s wolf pack is aware of his feeling for Bella by their unique ability to hear each other’s thoughts. When Jacob and Bella finally see each other Jacob is determined to get Bella to admit that she also loves him.

Alice with her gift for foresight sees a newborn vampire army being assembled. Newly made vamps are very strong and hard to kill as they are lost in their imperative to feed. The Cullens realize that Victoria is behind this new development in her attempt to seek revenge for the death of her boyfriend by Edward’s hand. The Cullens must make an alliance with the wolf pack to fight.

The third part of the Twilight Saga is directed by David Slade who also did 30 Days of Nights. The special effects and action sequences flow with more precision than the last 2 films. The lead trio, Kristen Stewart, Robert Pattinson and Taylor Lautner show more confidence in their characters. Considering the painfully stiff performances in the earlier films this one seems almost more natural and familiar. The other cast and characters are all given all too brief screen time. The back story of the Cullen kids are explored with flashbacks which was infinitely more interesting than the whole Jacob or Edward thing.

The main plot of the book and movie deals with the war between the newbie vamps, the Cullen’s and the wolf pack. Where the book goes into detail with the battle and the Volturi aftermath, this movie plays to the fans of team Jacob or team Edward. Bella has to admit and confront her true feelings for Jacob culminating in a kiss between them. I’m not really giving spoilers because if you are going to see this movie it’s because you’ve read the books. A major portion of the movie deals with Bella’s decision to be “turned” before her birthday so she will not be physically older than Edward. While Jacob is trying to convince her that she can live and that she belongs with him. It would have been more interesting to have more focus on the action than all the insipid angst. Of the 3 films so far, this one is the best of the series. Hoards of fans will fill the theaters no matter what, but it helps to have either seen the first two movies or read the books.
(Review by Reesa)