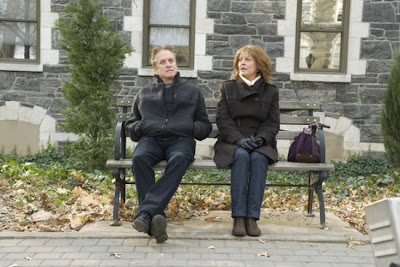 Ben Kalmen was a car magnate who through a series of bad choices both personal and professional finds him self alone and estranged from his family and friends.

Ben (Michael Douglas) was told by the doctor that his heart needs more tests. Instead, he starts down the path of self destruction thinking he may as well live doing whatever he wants until his heart gives it up. The once famous car dealer known for his honesty starts cheating his customers and having one night stands. Six years later he’s lost his business, he’s divorced from Nancy (Susan Sarandon) and his daughter Susan (Jenna Fischer) has a guarded relationship with her father although Ben dotes on his grandchild. Ben also has a new girlfriend Jordan (Mary-Louise Parker) who asks Ben to take her daughter Allyson (Imogen Poots) to visit his college and use his influence with the dean to get her admitted. Allyson blackmails Ben into letting her have some freedom on this trip if she doesn’t tattle to her mom about catching Ben in one of his infidelities. They are met on campus by Daniel (Jesse Eisenberg) who Ben offers advise on how to pick up women. Ben is incorrigible about his prowess with women. He’s a car salesman and always closes a deal. He has big plans to build a new car dynasty using his girlfriends’ fathers influence. Everything looks great until Ben in his typical selfish pattern does an unforgivable mistake and Jordan destroys his second chance at success. The world is falling apart around him, but Ben keeps hustling, hitting his daughter up for money, and carousing until there’s no where else left for him to go.

Co-directors David Levien and Brian Koppelman (who also wrote the screenplay) keep the film well paced. Susan Sarandon doesn’t really have much to do besides look patient and understanding. Danny DeVito as his old friend Jimmy who gives him a job at his sandwich shop gives Ben a balance. Jenna Fischer stands out as his daughter who loves him but must protect herself and her son from her father’s downward spiral vortex. Douglas plays Ben with an unflinching bravery. The unforgiving camera captures Ben with complete honesty. Ben describes himself as once being a lion that held attention when he entered a room but now he has suddenly become invisible. It’s hard to be sympathetic to Ben as he’s such a scoundrel, but Douglas gives us just a glimpse of something else there that makes you want him to either wake up and smell the coffee before it’s too late or go out in a blaze of glory.
(Review by Reesa)