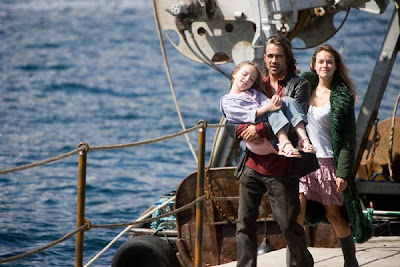 Syracuse is down on his luck fisherman in Ireland. He is devoted to his ill young daughter by his ex wife. One day Syracuse brings up his nets on his trawler and there’s a woman entangled within. Amazingly she’s still alive, but seems to suffer from a lack of memory. She calls herself Ondine, as this is name of the water spirit and it seemed fitting.

When his daughter Annie (Alison Barry) asks her father if “Anything strange or wonderful” happened that day he tells her a story of a woman found in a net. His precocious child tells him that the woman must be a selkie, a creature that changes shape from a seal to a woman and back again. Syracuse (Colin Farrell) hides Ondine (Alicja Bachleda) at his mother’s old house by the water as she is afraid to be seen. Ondine goes along with the mermaid persona to that point where Syracuse almost believes it. Especially since his luck seemed to change when he took her with him on his fishing trips, he manages to bring in big catches. Life has been hard on him with an alcoholic ex wife, a daughter with some series of health issues that require her to travel about town in an motorized wheel chair and have dialysis treatments. Annie goes to the library and studies on the legends wants to believe that Ondine is a real selkie. Ondine takes her swimming and finds this seaweed covered package on the sea bottom. Annie assumes this is Ondines seal coat that once it’s hidden she can stay in her human form until it’s found and returned to her again. Syracuse seeks the advice of the local priest (Stephen Rea) in the confession that he seems to use as an AA meeting to keep from drinking. There is no denying that Ondine is making him happy and she in turn has brought joy in Annie’s life too.

Neil Jordan directed and wrote this fanciful little story about hope, salvation and the power to believe. Colin Farrell gives a much understated performance of a man who can’t believe the tenuous nature of his luck. The beautiful Alicja Bachleda has an ethereal quality and tantalizes the audience with her gracefulness in the seas. But the movie is stolen from both of them by Alison Barry who keeps both characters grounded by her sweet good natured attitude. The final reveal of who is Ondine and how she ended up in the nets brings the movie to a quick stop because at this point you are hoping that she really is a selkie.
Review by Reesa