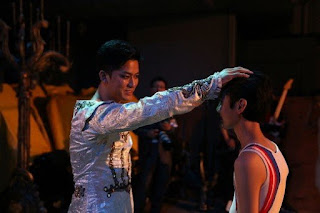 This picture from Korea tells the story of a North Korean defector, Pyeongho, working with the help of instrumental people to become a ballerino and be reunited with his sister. The film opens with Pyeongho working two jobs to support himself while living with a friend. It’s not until he steps into a ballet school that his life begins to take unbelievable jumps. What really hit me was that the lead goes through so much in this film. The filmmaker really wanted to translate what it meant to be separated from your family and undergo escaping your country at the risk of death. The lead has a quietness about him that made his magnificent journey through the world of ballet so much more humbling. The star of the Korean ballet ends up teaching Pyeongho with toughness and reluctance that eventually leads to caring. One choice that the lead makes in the film is to not work as much even though he needs the money in order to practice for an audition. This film teaches the concept of grabbing an opportunity by the throat even when faced with circumstantial opposition. The star Ballerino teacher has to learn to be less prideful after he loses a role early in the film to another company member. We see a gradual change installed in him through his relationship with Pyeongho and his former girlfriend. This explaining of people’s struggles and the way they think was clear to see in the film. Extra pushing for hard work was all over the screen with the sweat sprinkling off the heads of the rising star and his teacher. Conflict’s consequences were gripping me as I watched what happens to Pyeongho. I can’t imagine what it is like to witness a family member taken away from you in a desperate time. A flashback shows this exactly as Pyeongho loses his sister while crossing the burying fields of grass to South Korea. Pyeongho’s friend wishes he could be home again to be with his family and see the stars even if he doesn’t eat. This tear from people closest to you gets repeated and permeates Pyeongho throughout the two hours of story. There is a pivotal scene where the lead copies the moves of the star ballerino teacher from the back of him. The student’s potential to be a professional dancer is realized by the teacher in a way that sparks up their relationship for the rest of the film. With various belittling wounds happening close together, Pyeongho does not give up. Films like this have a purpose of many to let people in on how others live and show how they keep on going with perfect effort.
(Review by Wyatt Head)