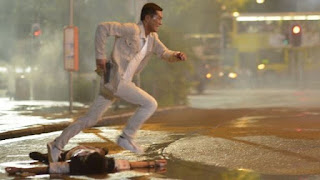 Wild City is a gruesome but intriguing look at a former cop, his brother, and a woman’s quest to end a gang war with them in Hong Kong. A woman named Yun gets drunk at T-Man, the cop’s, bar one night and gets his family involved in fighting a gang who’s trying to kill her. She also carries a case with dirty money and gold which is related to her former lover who is an attorney affiliated with the gangs. What made the sliced limbs and bloody bullets comfortable for me was that the protagonists were fierce good guys. T-man and his brother Chung, who help Yun end this chase, are dangerous forces of protection against the gangs. There are some scenes that are so second by second you think that they will get killed by close proximity. Yet, in reality they swing ferociously with the gang’s own knifes or slam the gangs rapidly to the point where the brothers are untouchable. Being a former cop, T-Man knows how to kill with his hands and plot situations where the gang is vulnerable. I love the type of action thrillers where the lead is or was in law enforcement. I really liked the small points where the brothers get back at certain gang members who hurt them. Even though at one point T-Man slices against an alive young member, there was a strange justice that I felt. The 3rd or 4th scene in where Yun is being kidnapped is very thrilling as you see T-Man and Chung tag-teaming to find the car. Chung is almost crushed by a semi and T-Man is attacked by several members. Knowing that even not 25 minutes in the film that level of loudness was all over the filmed city was very gratifying. Despite Chung’s teenager-like attitude, T-Man has a very straight, disciplined, and persistent personality that’s offsets his brother. Obviously don’t bring a 14 year old to this but do see it if you want to see some edgy urban battles. The Asian community makes fantastic films that sometimes beat anything made in the US. This was an example of a stimulating gangster film that was as not aggressive as to be indigestible. In the first scene I thought T-Man was actually a crooked cop when he said that everything has a price. I do realize now that that may be but some who are powerful can choose to fight for weaker majority.
(Review by Wyatt Head)