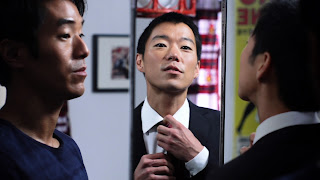 Director/writer Nelson Kim was raised in New Jersey and used the French film Cousins as the bare bones basis of his long feature movie debut. The low budget Kickstarter funded film was shot in Queens and around the actor's other schedules. It took a couple of years of working on the script and six years to get the film completed from the eighteen day shoot. It had it's Southwest premiere at the 14th Annual Asian Film Festival in Dallas which brought some interesting reactions to this puzzle film.

Jamie (Aaron Yoo) moves from Virginia to New York City for a summer job as an associate lawyer. He's hoping to leave his old life behind as he embarks on a new adventure and recreate himself. He's rooming with his cousin Will (Leonardo Nam) who has this really nice place and gives Jamie the small as a closet extra room. Will is more vivacious than the quiet and socially awkward Jamie. Will has some entrepreneurial ideas that so far has not panned out, but that doesn't stop his enthusiasm. He takes Jamie out for a few drinks and meets up with Kat (Jackie Chung) with whom he becomes immediately smitten. A feeling of guilt quickly overtakes him and he runs out after telling everyone that he just got engaged to his long time girlfriend Yoo Jin (also played by Jackie Chung). Jamie ends up breaking up with Yoo Jin and starts a relationship with Kat. He becomes more assertive at work and is finally feeling like everything is going well. But he's also indulging in cocaine first provided by Will and his hold on reality starts to slip. He's paranoid, can't sleep and believes Will is taking over Kat.

When things look bleak, the filmmaker changes lanes and suddenly events are not what them seem. Was it a dream? The replay doesn't seem like Jamie's life is any better when he decides not to snort the coke that led him down the wrong path. So while your head is still spinning another scenario is presented and it leaves the audience to decide what is reality and what is a figment of Jamie's with fulfilment. It's one of those movies that are open to interpretation. The director's use of mirrors as sort of metaphor for Jamie's sense of identity. The actors do a great job, especially Aaron Yoo who inhabits Jamie's various emotional and physical torments so effectively. So go see this, then go have coffee and talk it over with your friends.
(Review by reesa)

Email ThisBlogThis!Share to TwitterShare to FacebookShare to Pinterest
Labels: AFFD, Someone Else review